OCHA/Eva Modvig
Purok 5 camp where people were evacuated to due to fear of landslides. This family's temporary shelter is on the side of the road.

25 January 2013
The United Nations and its partners today called for a further $48 million to assist families devastated by Typhoon Bopha, which struck the island of Mindanao in the Philippines last month and caused massive destruction to homes, infrastructure and agricultural lands.

“Typhoon Pablo was the most deadly storm globally in 2012, and reportedly the most powerful storm to hit southern Mindanao in more than 100 years,” UN Humanitarian Coordinator for the Philippines Luiza Carvalho said at the launch of the revised appeal in Manila, referring to the typhoon by its local name.

The “Revised Typhoon Bopha/Pablo Response – An Action Plan for Recovery” seeks $76 million – a 17 per cent increase from the $65 million requested on 10 December at the onset of the disaster.

The revised plan outlines how the humanitarian community, in support of Government response efforts, will continue to provide life-saving assistance and recovery support to more than 920,000 people in Mindanao over the next six months. Major humanitarian needs include shelter, early recovery and livelihoods, food security and agriculture, and water, sanitation and hygiene.

To date, $27 million has been contributed towards the appeal, leaving a funding gap of $48 million, states a news release issued by the UN Office for the Coordination of Humanitarian Affairs (OCHA).

“I am deeply thankful to donors for their contributions so far, in particular in this difficult economic climate, and with so many crises around the world demanding our attention,” said Ms. Carvalho. “However, we need much stronger support if we are to meet the basic needs of those affected, and to help them on the road to recovery.”

Over 6.2 million people have been affected and close to 850,000 remain displaced. More than 210,000 houses, vital public infrastructure, and vast tracts of agricultural land have been severely damaged or destroyed. More than 1,060 lives were lost, and over 800 others are still missing.

The UN and the wider humanitarian community have provided assistance to tens of thousands of people, including life-saving food aid, emergency shelter, water and hygiene kits to minimize the risk of disease outbreaks, said Ms. Carvalho. Cash-for-work programmes are also being implemented in communities to empower people to support their families.

“However, the magnitude of this disaster demands more, and the funding and resources we have at present are not commensurate with the needs that we must meet,” she stated.

UNICEF seeks nearly $1.4 billion to assist children in crisis in 2013 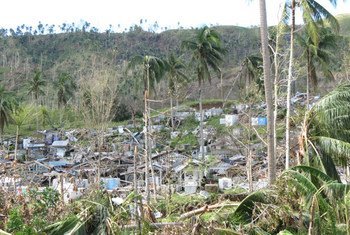 10 December 2012
The United Nations and its humanitarian partners today appealed to the international community for $65 million to provide immediate lifesaving aid and support in recovery to the millions affected by Typhoon Bopha in the Philippines.