13 January 2012
The head of the United Nations refugee agency has praised efforts to find a lasting solution for tens of thousands of long-term refugees in eastern Sudan, most of them Eritreans, but voiced concern over the vulnerability of the younger ones to human trafficking.

“Our refugee programme in Sudan is one of the oldest in Africa, at 45 years,” said António Guterres, the UN High Commissioner for Refugees, at a news conference in the Sudanese capital, Khartoum, yesterday at the end of visits to South Sudan and Sudan that started last weekend.

“Since then, the [Sudanese] Government has been hosting refugees from many countries generously,” said Mr. Guterres, acknowledging the strain that host communities in eastern Sudan have experienced after accommodating refugees for decades.

He said his agency, the UN High Commissioner for Refugees (UNHCR), would launch an initiative to help the long-term refugees to become more self-reliant through setting up income-generating schemes, while supporting development projects for the host communities.

The so-called transitional solutions initiative will be supported by the Sudanese Government and jointly implemented by UNHCR, the UN Development Programme (UNDP) and the World Bank.

Earlier on Thursday, Mr. Guterres visited Kassala in eastern Sudan which hosts more than 86,000 refugees, many of whom fled conflict between Eritrea and Ethiopia half a century ago. The majority of refugees there were born in camps in Sudan, and share the culture and language of the host community. At Shagarab I camp, Mr. Guterres met with refugee women who have benefited from a micro-credit scheme funded by UNHCR.

Every month, some 2,000 asylum-seekers reach the camp, mostly single young men from Eritrea. Some come to escape military conscription, while others are motivated by a possibility of a better life elsewhere, according to UNHCR. Many stay in the camps for a couple of months before joining smuggling networks that transport them to Khartoum, the Middle East or Europe.

“It’s painful to see so many young people become victims of trafficking and kidnapping. Some are even killed. We are prepared to support the Government to crack down on the smugglers and to protect the victims,” said Mr. Guterres.

He also addressed issues of the future of an estimated 700,000 South Sudanese who are still in Sudan after their country seceded in July last year. Some 110,000 of them have so far been registered to return to South Sudan, but are stranded in Khartoum and other areas due to a lack of funds, transportation and security.

“Both governments have agreed to a bilateral plan of action, which we hope will be established in the near future to allow for a more effective return to the south. This will involve air movements for the most vulnerable people, but the opening up of safe convoys by land will be most crucial,” Mr. Guterres added.

Guinea-Bissau: Security Council calls for respect of institutions during transition 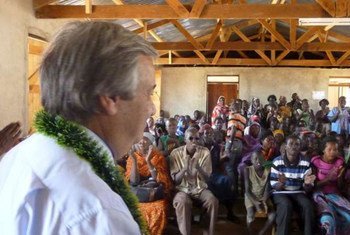 9 January 2012
The head of the United Nations refugee agency today urged the international community to show greater solidarity with South Sudan as it strives to cope with enormous humanitarian challenges as tensions between communities cause internal displacement amid a refugee influx from Sudan.