At General Assembly, UN chief calls for casting off ‘tyranny of the status quo’ to achieve progress in 2013

At General Assembly, UN chief calls for casting off ‘tyranny of the status quo’ to achieve progress in 2013

22 January 2013
Stressing that now is not the time for business as usual, Secretary-General Ban Ki-moon today called for innovative action to tackle the numerous challenges facing the world and to meet shared goals such as sustainable development, disarmament and conflict resolution.

“My fervent hope – and our common urgent need – is that we can stop moving from crisis to crisis, from symptom to symptom, and instead address the underlying causes and inter-relationships, and recognize the flaws in many of our approaches,” Mr. Ban said in his address to the General Assembly.

In his first meeting of the year with the United Nations membership, the Secretary-General noted that too often, governments and the international machinery operate on auto-pilot.

“Issues remain in their silos; worrying trends are allowed to persist and unfold, all because ‘that is the way things have been done’, or because true change is seen as costly or unrealistic, or entrenched interests have a hold on the legislative machinery,” he stated.

“This is no time for business as usual,” Mr. Ban underscored. “To shape the future we want, will have to think and act innovatively and differently. We will have to throw off another brake on our common progress: the tyranny of the status quo.”

This is particularly true given the tremendous turmoil and uncertainty in today’s world, he continued, noting that “from armed conflict in Africa and the Middle East, to economic and environmental distress across the globe, we are being tested every minute of every day.”

These imperatives, or ‘generational opportunities,’ flowed from the eight priorities the Assembly has set for the UN: sustainable development, peace and security, human rights, humanitarian assistance, disarmament, justice, the development of Africa, drug control, crime prevention and combating terrorism.

As he reported on what has been achieved in some of these areas, the Secretary-General stated that he was encouraged, but far from satisfied. “The stresses of our times, the pressures on our planet, the pain of the people we serve – all this demands that we do better in 2013,” he said.

To begin with, Mr. Ban called on Member States to come forward with generous pledges at the Syria Humanitarian Conference that he will convene next Wednesday in Kuwait. The humanitarian community is seeking $1.5 billion to assist millions in need in the next six months.

“We must do everything we can to reach Syrians in need. We must intensify our efforts to end the violence through diplomacy, overcoming the divisions within Syria, the region and the Security Council,” he stated, adding that Syria is one among several crises that have led to the largest refugee flows since the Kosovo crisis 13 years ago.

The crisis in Syria, which began in early 2011, has led to the deaths of more than 60,000 people and left four million people in the country in need of assistance, half of whom have been displaced internally. In addition, there are 650,000 displaced people displaced in neighbouring countries, in North Africa and in Europe.

Other large-scale displacements are taking place in the Africa’s Sahel region and Mali, which is under threat from terrorists, with regional and global repercussions, the UN chief added. The renewed clashes in northern Mali, as well as the proliferation of armed groups in the region, drought and political instability in the wake of a military coup d’état last March have uprooted hundreds of thousands of civilians over the course of 2012.

“Working with African and international partners, we must do our part to help fully restore Mali’s constitutional order and territorial integrity,” he said. “Meanwhile, we continue to work towards an integrated strategy for the Sahel region that would address the mix of extremism, poverty, drought and governance challenges that is causing such profound misery and dangerous insecurity.”

In 2013, it is also necessary, he stated, to “re-consider our approach” to the Democratic Republic of the Congo, salvage the two-State solution and the Israeli-Palestinian peace process, do more to advance the principle of the ‘responsibility to protect’ in the face of grave crimes and incitement, and advance the rule of law on disarmament and non-proliferation.

This year will also see continued action on the “paramount” challenge of sustainable development, on the campaigns against violence based on sexual orientation and on ending violence against women, among other issues.

“This Organization has a solid record of achievement,” Mr. Ban stated. “UN staff across the world continue to perform heroically, often under daunting circumstances.

“But we must do more than save lives, central as that is to our mission. We must save our very future,” he said. “Let us make the year ahead one in which we rise above disunity and the lowest common denominator, and show the world that good international solutions are in the national interest.”

Speaking to reporters afterwards, Mr. Ban announced that he will depart tomorrow on a three-nation trip in which all of these challenges will figure prominently. He will travel to Davos, Switzerland, for the World Economic Forum, followed by Addis Ababa, Ethiopia, for the African Union Summit, and finally Kuwait for the Humanitarian Pledging Conference for Syria.

“The calamity in Syria is without doubt our main immediate test,” he told a news conference.

From fighting poverty to building a safer world, UN chief outlines priorities for 2011 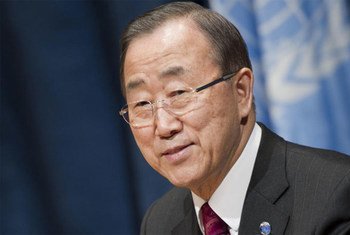 19 December 2012
“The gains of 2012 position us for further advances in the years ahead. We have seized some opportunities, but failed on many others. Too much of our progress is lost to conflict or remains fragile for want of investment and commitment. There is too little emphasis on prevention, people and global citizenship. Far too often, short-term thinking trumps long-term vision.”