The head of the United Nations food agency today mourned the passing of renowned Italian scientist and physician Rita Levi Montalcini, who also served as a Goodwill Ambassador for the world body.

“Professor Montalcini was recognized internationally as one of the world's finest minds. At FAO, we knew her as a wise and gracious friend, a tireless advocate for a hunger-free world,” the Director-General of the UN Food and Agriculture Organization (FAO), Jose Graziano da Silva, said in a news release.

“FAO will always be grateful to her for helping to keep the drive to end hunger, malnutrition and extreme poverty high on the international agenda,” he added.

Prof. Levi Montalcini, an FAO goodwill ambassador since 1999, died on 30 December in Rome at the age of 103.

A physician and neurobiologist, she had won the Nobel Prize for Medicine in 1986 and was named Senator for Life by the Italian authorities. As an FAO Goodwill Ambassador, she wrote articles and editorials on the plight of the hungry, and regularly attended and spoke at high-level FAO events.

In recent years, according to FAO, Prof. Levi Montalcini had urged young people to become more involved in eliminating hunger, which she called a “tragic reality.” 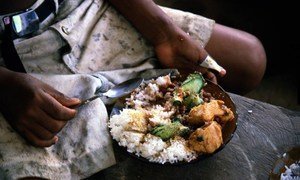