UN chief condemns latest violence in Pakistan, calls for perpetrators to be brought to justice

Appalled by the “escalating terrorist violence” in Pakistan, United Nations Secretary-General Ban Ki-moon has spoken out on the matter, calling for those responsible to be held accountable, according to his spokesperson.

In a statement issued on Sunday night, the spokesperson said that the UN chief condemns the “the continued violent targeting of religious minorities” – the latest such incident involving the bombing of three buses carrying pilgrims on Sunday – as well the killing of 21 members of a Government-backed tribal police force last week.

“These cruel acts of violence cannot be justified by any cause or grievance. Their perpetrators should be brought to justice,” the spokesperson said, noting that the Secretary-General conveys his deepest sympathies to the families of the victims.

“He expresses the solidarity of the United Nations with the Government and people of Pakistan and its continued support for their efforts to defend their country's institutions and freedoms in the face of the scourge of terrorism,” the spokesperson added.

A car bomb was used in the attack on the three buses in the country's south-west. The vehicles had been transporting Shia pilgrims to Iran, the location of various Shia holy sites. Some 20 of the pilgrims were reported killed and another 25 injured.

In the killing of the members of the Government-backed tribal police force, the deceased had been kidnapped last week in north-west Pakistan by the Tehreek-i-Taliban Pakistan, sometimes referred to as the 'Pakistani Taliban.' According to media reports, the 21 had been executed over the weekend. 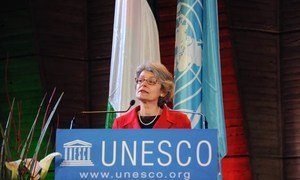