20 December 2012
A United Nations envoy, Vijay Nambiar, has wrapped up a visit to Myanmar during which he was able to meet with people displaced by the inter-communal violence this year in Rakhine state, as well as discuss with the Government how to address the problems facing the communities there.

Several waves of clashes between ethnic Rakhine Buddhists and Rohingya Muslims, the first of which occurred in June, have left 115,000 people displaced, as well as more than 100 dead, according to UN estimates.

Mr. Nambiar, the Secretary-General’s Special Adviser on Myanmar, accompanied the Minister for Immigration and Population Affairs, U Khin Yi, on a visit to Rakhine state, located in the Asian nation’s west.

“This visit helped the Special Adviser see the current conditions of the internally displaced persons from both communities in the area and also allowed him to participate in the discussions which the Minister was holding with the representatives of the two communities, together and separately,” said a news release issued in Yangon.

During those discussions, the Minister presented some ideas on the way forward, especially on a framework for addressing the problems afflicting the communities there.

In his comments to the communities, Mr. Nambiar underlined his initial impression that the Minister’s outline of his proposal was “forward-looking and realistic, while taking into account the dignity and essential interests of the affected communities.”

Mr. Nambiar’s visit, which began on 16 December, was at the invitation of the Myanmar Government, which has pledged to take measures to address the violence in Rakhine.

Last month, President Thein Sein wrote to Secretary-General Ban Ki-moon that his Government was prepared to address “contentious political dimensions, ranging from resettlement of displaced populations to granting of citizenship.”

It would also look at “issues of birth registration, work permits and permits for movement across the country for all, in line with a uniform national practice across the country ensuring that they are in keeping with accepted international norms.”

In addition, the President underlined the commitment of the Government to meet the humanitarian needs of individuals and communities in the affected areas of Rakhine state and sought wider international assistance and cooperation in this regard. 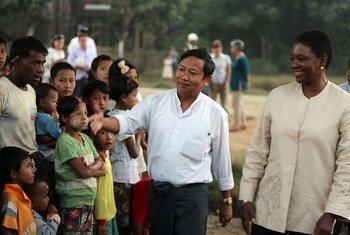 5 December 2012
On a visit to a Myanmar state wracked by inter-communal violence, the top United Nations relief official today called on the country’s leaders to support UN and other humanitarian efforts in the region.