OCHA
Under-Secretary-General for Humanitarian Affairs and Emergency Relief Coordinator Valerie Amos (right) on a tour of Rakhine state in Myanmar.

5 December 2012
On a visit to a Myanmar state wracked by inter-communal violence, the top United Nations relief official today called on the country’s leaders to support UN and other humanitarian efforts in the region.

“The trust is not there,” the Under-Secretary-General for Humanitarian Affairs and Emergency Relief Coordinator, Valerie Amos, said after touring several communities across Rakhine state on Myanmar’s west coast.

“We need the political leaders in Myanmar to support the important humanitarian work being done by the United Nations and our partners,” she added, as she spoke of the need for local leaders to “speak out and explain that they have asked us to be here to help.”

“Our job is to try to help everyone in need,” Ms. Amos stated, according to a press release from the UN Office for the Coordination of Humanitarian Affairs (OCHA).

Clashes between ethnic Rakhine Buddhists and Rohingya Muslims broke out in the north of the state in June, leading the Government to declare a state of emergency there. That bout of violence reportedly left at least a dozen civilians dead and hundreds of homes destroyed, while internally displacing some 75,000 people.

Since then, at least 89 people were killed and 36,000 displaced in the wake of a renewed upsurge in violence, beginning in late September, which also left more than 5,300 houses and religious buildings destroyed, according to UN estimates.

“Tensions between the communities are still running very high,” said Ms. Amos, who travelled with the Myanmar Minister of Border Affairs, Lieutenant General Thein Htay, to Myebon, Pauktaw and Maungdaw, and also to a series of camps outside Sittwe.

“I was shocked to see so many soldiers everywhere keeping communities away from each other,” she added.

Ms. Amos said people of both communities consistently gave her the same message: that they were living in fear and wanted to return to living a normal life.

“There is an urgent need for reconciliation,” said Ms. Amos.

Currently, some 115,000 people are living in camps or with host families across Rakhine state, according OCHA.

While Ms. Amos highlighted that security threats to humanitarian workers posed a major challenge to providing assistance, OCHA added that coordination between the Government and UN agencies had improved in the camps outside Sittwe, where more than 70,000 people are living. “The level of assistance provided to people in the different camps varies significantly,” the Office said.

Ms. Amos spoke of her concern over camp conditions, noting for example that the situation in Myebon is “dire.”

“I saw thousands of people in overcrowded, sub-standard shelter with poor sanitation,” she said. “They don’t have jobs, children are not in school and they can’t leave the camp because their movement is restricted.”

Ms. Amos said other challenges included a lack of partners on the ground, while inadequate funding was limiting the capacity to respond.

Some $41 million of the $68 million needed to help the 115,000 displaced people during the next nine months remains outstanding, according to OCHA, citing revised figures from the Rakhine Response Plan put together by the humanitarian community in Myanmar. 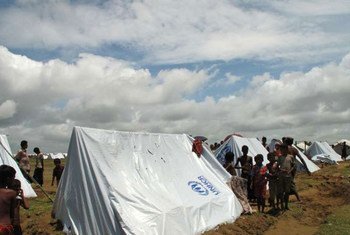 23 November 2012
The United Nations refugee agency today announced it has started an aid airlift for those displaced by the recent inter-communal violence in Myanmar’s Rakhine state.