20 December 2012
A United Nations independent panel investigating human rights violations in Syria has released a new update on the situation in the Middle Eastern nation, noting that violations continue unabated and reiterating the need for a political solution to the conflict there.

“The war of attrition that is being fought in Syria has brought immeasurable destruction and human suffering to the civilian population. As the conflict drags on, the parties have become ever more violent and unpredictable, which has led to their conduct increasingly being in breach of international law,” the Commission of Inquiry on Syria stated in its latest update, covering the period between 28 September to 16 December.

“The sole way to bring about an immediate cessation of the violence is through a negotiated political settlement which meets the legitimate aspirations of the Syrian people,” the Commission added, noting that it strongly supports the Joint Special Representative of the UN and League of Arab States for the crisis in Syria, Lakhdar Brahimi, in his efforts to bring the parties towards such a settlement.

The Commission – which comprises Paulo Sergio Pinheiro, Karen AbuZayd, Carla del Ponte and Vitit Muntarbhorn – has been mandated by the Geneva-based Human Rights Council to investigate and record all violations of international human rights law in Syria, where at least 20,000 people, mostly civilians, have been killed since the uprising against President Bashar al-Assad began in March 2011.

The conflict, now in its 22nd month, has spawned more than 500,000 refugees, while an estimated four million people inside the country need urgent humanitarian assistance. The Syrian Government has yet to allow the Commission to undertake investigations inside the country.

The Commission has also been tasked with investigating allegations of war crimes and crimes against humanity, and its mandate was recently expanded to include “investigations of all massacres.” Its latest update is based on interviews with some 100 witnesses and victims, with the Commissioners and their staff having interviewed a total of just under 1,200 people since they began their work in August 2011.

The new 10-page update – the latest in a series of reports and updates – paints a bleak picture of the conflict and continuing international human rights and humanitarian law violations taking place in Syria, with civilians continuing to bear the brunt as the front lines between Government forces and the armed opposition move deeper into urban areas.

“Violence has increased dramatically in and around major cities, in particular Damascus and Aleppo, where anti-Government fighters have advanced to neighbourhoods close to the cities’ centres,” the Commission states in the update. “Anti-Government armed groups were also reported in governorates such as al-Raqqah and al-Hasakah where they have clashed with army units, provoking shelling and artillery attacks.”

In addition, it notes that mounting tensions have led to armed clashes between different armed groups along a sectarian divide – particularly involving Sunni and Shia communities, as well as the Alawaite minority – with such incidents taking place in mixed communities or where armed groups had attempted to take hold of areas predominantly inhabited by pro-Government minority communities.

“The risk of the Syrian conflict devolving from peaceful protests seeking political reform to a confrontation between ethnic and religious groups has been ever present,” the Commission stated. “As battles between Government forces and anti-Government armed groups approach the end of their second year, the conflict has become overtly sectarian in nature.”

Furthermore, the country’s other minority groups – such as the Armenians, Christians, Druze, Palestinians, Kurds and Turkmen – have been drawn into the conflict. “Feeling threatened and under attack, ethnic and religious minority groups have increasingly aligned themselves with parties to the conflict, deepening sectarian divides,” according to the update.

However, the sectarian lines fall most sharply between Syria’s Alawite community, from which most of the Government’s senior political and military figures hail, and the country’s majority Sunni community who are broadly, but not uniformly, in support of the anti-Government armed groups.

The update observes that most of the foreign fighters filtering into Syria to join the anti-Government armed groups – or to fight independently alongside them – are Sunnis hailing from countries in the Middle East and North Africa, adding that the increasingly sectarian nature of the conflict provides one motivation for other actors to take part.

The update notes that the Lebanese Shia group Hezbollah has confirmed that its members are in Syria fighting on behalf of the Government, and there have also been claims, still under investigation, of Iraqi Shias coming to fight in Syria. Iran confirmed on 14 September that members of its Revolutionary Guards are in Syria providing “intellectual and advisory support,” the Commissioners added.

In addition to highlighting the violence which has resulted in many thousands of dead and wounded, arbitrary detention and disappearances, huge displacement and the massive physical destruction in Syria, the Commission’s update also describes how World Heritage sites have been damaged or destroyed, as well as entire neighbourhoods of several of the country’s biggest cities.

The Commission of Inquiry will present its fourth report to the Human Rights Council in March next year.

Also today, the UN Special Coordinator for Lebanon, Derek Plumbly, met with that country’s Prime Minister, Najib Mikati, and discussed a range of issues – including the impact of recent developments in Syria on its Lebanese neighbour.

“We discussed the issue of displaced Syrians, and the significant rise in the numbers of Syrian and Palestinian refugees who have fled to Lebanon during the past week. We agreed that two things have to be highlighted: the very difficult circumstances that forced these people to leave their homes, and the humanitarian obligation to assist them until they are able to return,” the UN envoy said in a statement after the meeting.

According to the Office of the UN High Commissioner for Refugees (UNHCR), there are some 155,00 displaced Syrians currently seeking refuge in Lebanon, and their humanitarian needs are expected to increase with the onset of winter in the region.

“We understand that this represents a very big burden for Lebanon, and one which is likely to grow before those displaced are able to return home,” Mr. Plumbly said, adding that the UN humanitarian agencies concerned are working in the “closest possible fashion” with the Lebanese Government to help it and the displaced people and the communities receiving them.

“We are standing and will stand shoulder to shoulder with Lebanon in this,” the envoy added. “I reiterated to the Prime Minister the support of the United Nations for the response plan that the Government has prepared, and for the arrangements put in place in it.” 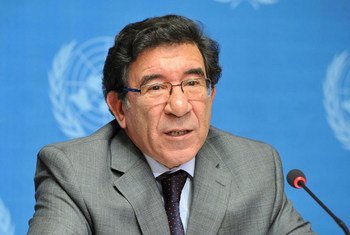 19 December 2012
The United Nations and its humanitarian partners today appealed for $1.5 billion to assist civilians affected by the ongoing conflict in Syria over the next six months, including those inside the country as well as those taking refuge beyond its borders.