In the wake of a visit to Syria, a senior United Nations official has welcomed the commitment made by the Middle Eastern country’s authorities to allow the world body to begin the independent verification of alleged violations against children in the conflict taking place there.

“This will allow for better monitoring and reporting of grave violations committed against children so we can take action directly with perpetrators to stop these violations,” said the Secretary-General’s Special Representative for Children and Armed Conflict, Leila Zerrougui.

“The situation I witnessed in Syria is dire for children,” she added. “The immediate end to the violence and an inclusive peace is the only viable option, if we are to preserve the future generation of Syria’s children.”

The UN official’s comments followed a four-day visit to Syria, which ended on Monday, and during which she engaged State authorities and the armed opposition on the issue of better protection of children.

During her discussions with the Government, according to a news release from her office, Ms. Zerrougui raised strong concerns regarding the on-going fighting and its impact on children, especially the use of heavy weapons and the bombardment of populated areas.

She also advocated for the proactive protection of schools and the prevention of their military use by Syrian Government forces and the opposition.

“The events in the Al-Yarmouk camp in Damascus on Sunday, which resulted in the killing and injuring of Palestinian children, is just one example of the horrors that children continue to face each and every day in Syria,” the Special Representative said.

According to the UN Relief and Works Agency for Palestine Refugees in the Near East (UNRWA) – which is the main provider of education, health, social and other basic services to five million registered Palestinian refugees across the region – Syrians and the over 150,000 Palestine refugees resident in Yarmouk, a suburb of Damascus where the camp is located, have experienced particularly intense armed engagements involving the use of heavy weapons and aircraft.

“Credible reports point to civilian deaths, injuries and destruction of property in Yarmouk,” the UN agency said on Monday. “There are also waves of significant displacement as Yarmouk residents, including UNRWA staff and their families, scramble to seek safety as the armed conflict persists.”

The Special Representative’s office noted that earlier this year, the Syrian Government’s forces were, for the first time, added to Secretary-General Ban Ki-moon’s ‘list of shame’ of those who recruit and use children, kill and maim, commit sexual violence or attack schools and hospitals.

The so-called ‘list of shame’ is contained in the UN chief’s yearly report to the Security Council on children and armed conflict, and gives an overview of the grave violations committed against girls and boys in conflict zones, and the main perpetrators of such acts, as well as measures taken for the protection of children.

The Special Representative’s office noted that the United Nations has also received reports of the Syrian armed opposition using children as spies, porters and for other purposes in their operations.

Although the current security situation did not allow Ms. Zerrougui to personally meet the armed opposition, she contacted two armed opposition commanders to raise allegations of association of children with the opposition, and to deplore terror tactics by certain units which have taken the lives of innocent civilians, including children, over the past months.

“Our eyes will stay on the opposition to see whether they are serious in the commitment made to protect girls and boys,” she added.

During her visit, the Special Representative also met in Damascus and Homs, as well as the Al-Yarmouk camp, with internally displaced and refugee children who were in need of protection as well as food, medicine and shelter in the winter months to come. 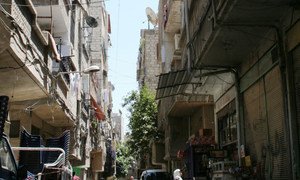