18 December 2012
While noting the many challenges related to the flow of opiates from Afghanistan, the United Nations crime chief today praised the joint achievements of that country and two of its neighbours for their efforts to halt this movement.

“The close collaboration between Afghanistan, Iran and Pakistan is achieving operational successes. More than eight tons of drugs have been seized in 17 operations planned and coordinated by the Joint Planning Cell, which is one of the key features of the Triangular Initiative,” the Executive Director of the UN Office on Drugs and Crime (UNODC), Yury Fedotov, said at the end of a one-day visit to the Iranian capital of Tehran.

The UNODC chief was there for the 6th Ministerial Meeting of the Triangular Initiative, which is made up of Afghanistan, Iran and Pakistan. Launched by policy-makers from the three countries in Vienna in June 2007, it set in motion a series of trust-building measures and joint operations, with the ultimate goal of information- and intelligence-sharing.

The Initiative’s Joint Planning Cell, based in Tehran, deals with information- and intelligence-sharing and the implementation of joint operations targeting regional drug trafficking networks.

UNODC’s role in the Triangular Initiative is to serve as its Secretariat, facilitate the implementation of technical assistance and mobilize financial support.

According to the UN agency, Afghanistan produces around 90 per cent of the world’s opiates, and the southern part of the country is the world’s largest opium-producing region. Each year, more than 70 per cent of Afghan opiates are trafficked via Iran and Pakistan. While some of the trafficked opiates are for local consumption, most are destined for shipment to more profitable markets.

The UN agency notes that West and Central Asia confront organized crime threats, corruption, instability and HIV/AIDS, as well as increased drug consumption, due to trafficking in opiates.

In his speech to the Triangular Initiative meeting, Mr. Fedotov called for joint patrols and operations as a regular practice. He said these operations should also be based on the real-time exchange of information and intelligence between the three countries.

The UNODC chief also said there needs to be a strengthening of drug control maritime cooperation between Pakistan and Iran, as well as other regional players.

“I cannot overemphasize the importance of a maritime response to illicit drugs and crime,” Mr. Fedotov said. “The criminals are using the seas around Western Asia to their advantage, we must coordinate to increase the risk of their detection.”

The UN official said a regional response focussed on law enforcement was not enough to deal with the problem.

“We must also consider the enormous health implications of drug use in the region. A response to drug demand is a priority,” Mr. Fedotov said. “We need to increase exchanges and technical cooperation in the areas of treatment of drug use and control of the spread of HIV/AIDS among drug users.”

At UN and Olympics exhibition, Ban highlights role of sports in advancing shared goals for peace 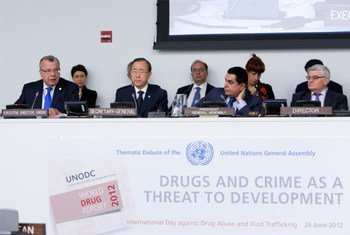 26 June 2012
Highlighting the impact of drug abuse around the world, the head of the United Nations anti-drugs office today said that countering transnational organized crime and illicit drugs must become an integral part of the development agenda.