UNMISS
South Sudan Human Rights Commission in partnership with UNMISS and the Office of the High Commissioner for Human Rights.
11 December 2012

The United Nations human rights office today expressed its concern over the recent killing of a prominent public commentator in South Sudan, warning that a series of attacks on human rights defenders in the country amounted to an “assault on freedom of expression.”

Addressing a news conference in Geneva, a spokesperson for the Office of the UN High Commissioner for Human Rights (OHCHR), Rupert Colvile, pointed to what he called the “tragic silencing” of Ding Chan Awol, a well-known South Sudanese journalist and political commentator who had been threatened for writing on political issues.

According to media reports, Mr. Awol – who was a former UN staff member during the Sudanese civil war in the 1990s and worked as a government official at the time of his death – also went by the pseudonym Isaiah Abraham, penning articles for news websites including the Sudan Tribune and Gurtong, where he was often critical of the South Sudanese government.

On the morning of 5 December, he was reportedly lured from his home on the outskirts of the South Sudanese capital of Juba by unidentified gunmen and shot to death.

Although Mr. Colville welcomed South Sudan President Salva Kiir’s request for a thorough investigation into the killing, he noted that over the past six months, there had been similar attempts by unknown parties to intimidate local human rights and civil society activists, including members of the South Sudan Civil Society Alliance.

In one particular instance in October, Ring Bulabuk, a leading activist who had been vocal in his condemnation of corruption among senior government officials, was kidnapped and subjected to torture.

Meanwhile, in a separate incident over the weekend, 10 protesters were shot to death in South Sudan’s Northern Bahr al Ghazal State when the army opened fire against them.

“We urge the Government of South Sudan to take remedial action and send a strong signal of its readiness to protect the safety of journalists and human rights defenders, as part of a wider effort to bolster support for freedom of expression in this young and fragile democracy,” Mr. Colville told the gathered journalists.

Turning his attention northwards to Sudan, the OHCHR spokesperson also expressed concern about recent clashes between students and police in its capital, Khartoum, where hundreds of protesters were demonstrating for the third consecutive day over the deaths of four Darfuri students belonging to El-Gezira University in central Sudan.

Mr. Colville said that the four Darfuri students had gone missing at the beginning of last week after participating in a protest about plans to repeal a tuition fee exemption for Darfuri students. Their bodies were discovered in a canal near the university on 7 December.

“There is a worrying trend of attacks on students in Sudan,” Mr. Colville stated. “We stress the need for swift investigations into the circumstances surrounding the murders of the students and the importance of bringing the perpetrators to justice.”

Referring to a recent example of violence against students in the Sudanese state of South Darfur, the spokesperson noted that in July, Sudanese police reportedly shot and killed at least eight people, mostly students aged 17 or under, while more than 50 others were injured in the same incident.

“Given the gravity of the incident and the numbers killed and injured,” he added, “we believe that a full, thorough and transparent investigation is essential.” 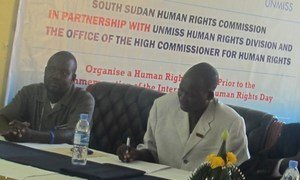 The United Nations Mission in South Sudan (UNMISS) expressed deep concern today at the reported murder of journalist Diing Chan Awol and added its voice to the growing calls for a full investigation into the killing.