MONUSCO/Sylvain Liechti
Armed group of M23 make their withdrawal from the city of Goma, DRC.

1 December 2012
The United Nations has welcomed the withdrawal of the 23 March Movement (M23) armed group from Goma, a provincial capital in the eastern Democratic Republic of the Congo (DRC), while also calling for stability be maintained in order to allow for humanitarian aid to reach those in need.

“We welcome this withdrawal, but emphasise that this is an early step and that stability in the region remains very fragile,” the spokesperson for the UN Department of Peacekeeping Operations (DPKO), Kieran Dwyer, told the UN News Centre today.

“It is critical that the M23 comply with the terms of the communiqué of the International Conference of the Great Lakes Region (ICGLR) restricting them outside the 20 kilometre zone around Goma and that they cease all military activity while a long-lasting solution continues to be worked on,” he added.

The city of Goma, the capital of North Kivu province, had been occupied last week by fighters with the M23 – a rebel group composed of soldiers who mutinied from the DRC national army in April – after a steady advance over preceding days, which included clashes with the national army, known by the French acronym FARDC.

The move drew widespread condemnation and calls for the fighters' immediate withdrawal, including from Secretary-General Ban Ki-moon and the Security Council. It also caused a humanitarian emergency, with tens of thousands of people uprooted amidst armed clashes and reports of targeted summary executions, the widespread recruitment and use of children, unconfirmed cases of sexual violence, and other serious human rights abuses.

As part of its efforts to support the national army, the UN Organization Stabilization Mission in the DRC (MONUSCO) deployed attack helicopters in aid of the FARDC's efforts to halt the M23 advance. The peacekeeping mission has 6,700 and 4,000 troops in the provinces of North and South Kivu, respectively, including, in some places, behind the M23 lines. North Kivu alone is four times the size of Belgium.

In Goma, the mission has some 1,500 'blue helmets.' During the M23 occupation, they controlled the city's airport and conducted regular patrols, in line with their mandate to provide protection for civilians.

“MONUSCO mobilised 17 rapid reaction units in the city throughout the day to monitor the M23 withdrawal which took place in a largely orderly manner,” Mr. Dwyer said, adding that its troops also secured key installations, including the Central Bank, Governor's House and communications infrastructure at Goma Hill.

The withdrawal is in line with an ICGLR communiqué issued on 25 November, which, in addition to the establishment of the so-called neutral zone, also urged the rebel group to stop the violence and threats to depose the DRC Government. The communiqué was issued after a meeting of the regional grouping - attended by several African heads of State - in the Ugandan capital of Kampala.

Throughout Saturday, UN peacekeepers escorted DRC national police, who had arrived from the city of Bukavu on 30 November, to various vital installations. “MONUSCO expects the deployment of an additional 1,000 Congolese national police to Goma in the coming days to control law and order in the city,” Mr. Dwyer added.

MONUSCO also continues to monitor the movements of M23 in the withdrawal to the 20 kilometre Neutral Zone, and has begun monitoring and patrolling this zone in accordance with the ICGLR communiqué.

UN humanitarian agencies and their partners have been working to provide assistance, including food, water and shelter, to around 140,000 people uprooted in North Kivu province – of which Goma is the capital – over the last week.

The situation arose within the context of an existing humanitarian crisis in eastern DRC – there were already 2.4 million internally displaced persons in the country, including more than 1.6 million in the eastern provinces of North and South Kivu.

“The people of the region have suffered too much as a result of armed groups. Well over 100,000 people urgently need humanitarian assistance, including food, health care and shelter,” Mr. Dwyer said. “In order for government, UN and other humanitarian assistance to be able to reach those in need, it is critical that stability be maintained and the rights of civilians be respected.”

He added, “Access for humanitarian assistance in all areas is a critical priority in the coming days, while MONUSCO works to consolidate stability in the 20 kilometre Neutral Zone.”

On Friday, the Security Council's so-called 1533 Committee – which deals with an arms embargo that applies to non-governmental entities and individuals operating in eastern DRC, as well as targeted travel and financial sanctions – added two M23 leaders to its list of individuals and entities subject to sanction measures.

The two are Baudoin Ngaruye, the group's third-highest ranked military leader, and Innocent Kaina, a sector commander – both men are said to be responsible for severe violations of human rights and international law, ranging from killings and abductions to the recruitment and training of child soldiers. 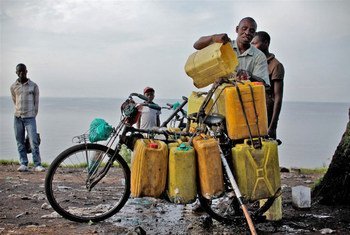 29 November 2012
While immediate humanitarian needs for civilians displaced by the latest fighting in and around the city of Goma in the eastern Democratic Republic of the Congo (DRC) are under control, there are serious concerns for the long term, particularly if there is further violence and additional displacement, a senior United Nations official said today.