IRIN/Jessica Hatcher
A man loads water collected from Lake Kivu onto his bicycle for sale in Goma, DRC, where municipal supplies have been interrupted.

29 November 2012
While immediate humanitarian needs for civilians displaced by the latest fighting in and around the city of Goma in the eastern Democratic Republic of the Congo (DRC) are under control, there are serious concerns for the long term, particularly if there is further violence and additional displacement, a senior United Nations official said today.

“Until the underlying causes of the crisis have been addressed, there is really a great potential for further violence, which can lead to further displacement,” the UN Humanitarian Coordinator for the DRC, Moustapha Soumaré, told a news conference in New York, via video-link from the DRC capital of Kinshasa.

Mr. Soumaré noted that the current emergency is occurring within the context of an existing humanitarian crisis in eastern DRC. There were already 2.4 million internally displaced persons (IDPs) in the country, including more than 1.6 million in North and South Kivu provinces.

UN humanitarian agencies and their partners have been working to provide assistance, including food, water and shelter, to around 140,000 people uprooted in North Kivu province – of which Goma is the capital – over the last week by the upsurge in fighting between government troops and the 23 March Movement (M23). Fighters with the M23 – a rebel group composed of soldiers who mutinied from the DRC national army in April – occupied Goma last week.

Some of the people who have been uprooted amid the latest fighting were already displaced before and were forced to flee again during the past 10 days, added Mr. Soumaré, who is also the Deputy Special Representative of the Secretary-General for the UN Organization Stabilization Mission in the DRC (MONUSCO).

What makes the current crisis particularly challenging, he noted, is that people have remained constantly on the move. “Therefore, it was very difficult for them to find help and it can be challenging for the humanitarian [community] to keep up with the needs of distressed people constantly moving,” he said.

The official stated that the humanitarian community has already started addressing the most urgent needs of about 110,000 displaced people around Goma, including providing water, hygiene and food.

“Immediate humanitarian needs for those near Goma more or less are under control in the short term, but we do have serious concern for the medium and long term,” he said, noting that, even if the situation stabilizes, people will need assistance to cultivate their lands, rebuild schools and repair medical centres.

Peacekeepers with MONUSCO, which is mandated to protect civilians, are closely monitoring M23 movements, covering all important entry and exit routes into Goma.

“Reports indicate movements of small groups of M23 troops in and out of Goma, but the Mission has not yet been able to ascertain whether there is a net reduction of M23 troops in the city,” a UN spokesperson, Eduardo del Buey, told reporters in New York.

Mr. Soumaré added that while the focus right now is very much on Goma, there are others parts of North Kivu and the rest of DRC that are in “great distress,” where violence has had a major impact on civilians and led to considerable humanitarian needs. 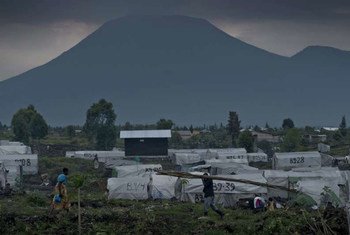 27 November 2012
Humanitarian agencies and their partners are working “around the clock” to provide basic services such as water, food and shelter to more than 140,000 people displaced by the recent violence in the Democratic Republic of the Congo (DRC), the United Nations said today.