29 November 2012
United Nations Secretary-General Ban Ki-moon today stressed the urgency of stepping up efforts to get the Middle East peace process back on track, and urged Israelis and Palestinians to show courageous leadership to reach a two-State solution.

“Achieving the two-State solution, to which both Israel and the Palestinians have committed, is long overdue,” Mr. Ban said in his message marking the International Day of Solidarity with the Palestinian People.

“I call on Israeli and Palestinian leaders to show vision and determination. I also urge the international community to help them forge a credible political path that will meet the legitimate aspirations of both sides,” Mr. Ban added.

Established in 1977, the Day marks the date in 1947 when the General Assembly adopted a resolution partitioning then-mandated Palestine into two States, one Jewish and one Arab.

Tension in the region increased as violence broke out earlier this month, with rocket attacks against Israel from Gaza and Israeli airstrikes on Gaza. The eight days of violence left an estimated 158 Palestinians dead, including 103 civilians, and approximately 1,269 injured. Six Israelis – four civilians and two soldiers – were reportedly killed by Palestinian rocket fire and 224 Israelis were injured, the vast majority civilians.

The violence ended when a ceasefire between Israel and the Palestinian group Hamas was declared on 21 November in the Egyptian capital, Cairo.

In his message, Mr. Ban, who recently met with leaders in the region, underlined the need to sustain the ceasefire and create the conditions that will allow the resumption of direct negotiations.

“The outlines of an agreement have long been clear, laid out in UN Security Council resolutions, the Madrid principles – including land for peace – the Road Map, the 2002 Arab Peace initiative and existing agreements between the parties,” he said. “What is needed now is political will and courage, as well as a sense of historic responsibility and vision for younger generations.”

The UN chief also called on Israel to cease settlement activity immediately, as this violates agreements and obstructs efforts towards peace. “Continued settlement activity in the West Bank, including East Jerusalem, is contrary to international law and the Roadmap, and must cease. Unilateral actions on the ground will not be accepted by the international community,” he said.

Regarding the General Assembly vote later today on a bid by Palestinians for Non-Member Observer State status, Mr. Ban stated that “this is a matter for Member States to decide. It is important for all concerned to approach this responsibly and constructively.”

He added, “The goal remains realizing the just and lasting peace for which generations of Palestinians and Israelis have been longing – a peace that will end the occupation that started in 1967, end the conflict and ensure that an independent, viable and sovereign State of Palestine lives side by side with a secure State of Israel.”

In her message to mark the Day, the Director-General of the UN Educational, Scientific and Cultural Organization (UNESCO), Irina Bokova, stated that lasting peace must be built on the basis of dialogue, understanding and reconciliation.

She also highlighted the agency’s activities supporting education for Palestinian children, helping to support the development and safeguard Palestinian cultural industries, and promoting freedom of expression in the region.

“These actions reflect UNESCO’s efforts to build peace from the ground up, on the basis of human rights and shared values. Education, culture, communication and freedom of expression are forces for solidarity – they are also the foundations for lasting peace,” Ms. Bokova said. 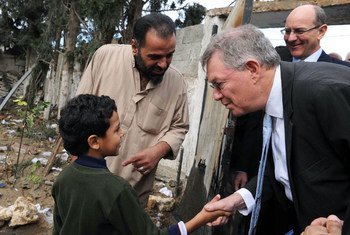 27 November 2012
The recent escalation of violence underscores the urgent need to get the Israeli-Palestinian peace process back on track, a top United Nations official told the Security Council today, stressing that the status quo is unsustainable.