IRIN/Adel Yahya
Voter education campaign poster in Yemen for the 21 February 2012 presidential poll which which was facilitated by the UN Peacebuilding Fund.

29 November 2012
Secretary-General Ban Ki-moon today called on Member States to increase their support to the United Nations Peacebuilding Fund, which provides financing for activities aiming to secure a lasting peace in countries emerging from conflict.

“Even a small increase or a renewal of commitment from a greater number of Member States will make a significant, and more sustainable, difference. Peace is the most cost-effective investment any of us can make,” Mr. Ban said at the Fund’s High-level Stakeholders Meeting.

The Fund is one pillar of the UN’s peacebuilding architecture, which also includes the Peacebuilding Commission (PBC), which was set up in 2005 to help struggling States avoid slipping back into war and chaos by providing strategic advice and harnessing expertise and financing from around the world to aid with recovery projects.

It is currently supporting 222 projects in 22 countries by delivering fast, flexible and relevant funding. Today’s gathering will review the Fund’s performance and will seek replenishment from Member States.

This year, the Fund helped the UN system to respond rapidly to needs – including by facilitating elections in Yemen, supporting the political transition in Somalia, and helping the reintegration of refugees from Libya in north-western Chad. It also provided support for security sector reform in Guinea, and stands ready to assist the Liberian Government’s national reconciliation roadmap.

“I believe we can and must build on the successes of the Peacebuilding Fund,” said Mr. Ban. “We have a growing number of multi-year commitments from Member States. This year we expect about $75 million in contributions.”

“But we can do better,” he added. “I would like to call on you to increase their support – particularly those of you who signed up in the early years, but have yet to renew your commitment. I would also encourage a broadening of the donor base.”

The Assistant Secretary-General for Peacebuilding Support, Judy Cheng-Hopkins, said that the past year has highlighted again that the Fund is “fast, catalytic and relevant, that is, taking risks and filling gaps.”

In January, she noted, Yemen counted on the Fund’s quickness to support the election – a crucial element of the country’s democratic transition – within the tightest of deadlines set by the political agreement reached by the various parties.

Also participating in today’s meeting was the Secretary-General’s Special Adviser on Yemen, Jamal Benomar, and Yemeni activist and Nobel peace prize laureate, Tawakkul Karman, who spoke via video-link. They addressed the peacebuilding challenges in Yemen and the critical role the Fund played and will continue to play in the transition there. 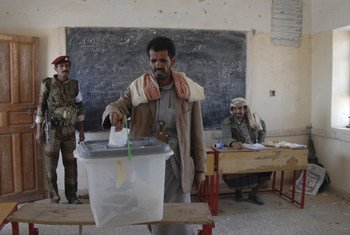 21 February 2012
As Yemenis vote today in elections that will bring to a close more than three decades of President Ali Abdullah Saleh’s rule, the United Nations is providing ongoing support to ensure that the ballot is carried out peacefully.