The text was approved by consensus on Monday by the General Assembly’s so-called Third Committee, which deals with social, humanitarian and cultural issues, and will be acted on by the Assembly next month.

It would have the Assembly urge States to take all measures – including legislation prohibiting female genital mutilation – to both protect women and girls and end impunity for this practice.

Female genital mutilation/cutting (FGM/C) refers to several different harmful practices involving the cutting of the female genitals for non-medical reasons. The UN World Health Organization (WHO) estimates that 140 million girls and women worldwide are currently living with the consequences of FGM.

Speaking at a special event at UN Headquarters today to mark the International Day for the Elimination of Violence against Women, Mr. Ban applauded the Third Committee for passing its first-ever resolution on ending female genital mutilation.

“I look forward to the Assembly’s adoption of this resolution, which would mark a major step forward in protecting women and girls and ending impunity for this practice,” he stated.

Among other provisions, the text would also have the Assembly designate 6 February as the International Day of Zero Tolerance for Female Genital Mutilation.

Over the past three years, some 8,000 communities across the world, including in 15 African countries, have abandoned the practice, according to the UN Population Fund (UNFPA). Last year alone 2,000 communities declared that they will no longer allow the human rights violation to continue. 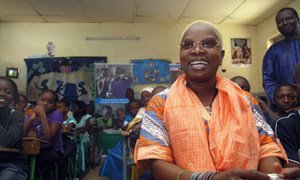 A senior United Nations official and the renowned singer-songwriter Angélique Kidjo today urged all UN Member States and communities to outlaw female genital mutilation (FGM) and raise awareness about its harmful effects, especially in African countries where the practice is most prevalent.