28 November 2012
Countries have a responsibility to implement national policies to end violence against women, United Nations officials stressed today, adding that urgent action is needed to stop one of the most pervasive human rights violations worldwide.

“Each and every State has an obligation to develop or improve the relevant laws, policies and plans, bring perpetrators to justice and provide remedies to women who have been subjected to violence,” Secretary-General Ban Ki-moon said at an event commemorating the International Day for the Elimination of Violence against Women.

“Each and every organization, community and individual has a responsibility to speak out against customs or beliefs that accept or condone acts of violence against women,” Mr. Ban said.

Violence against women and girls is one of the most widespread violations of human rights. In some countries, up to 7 in 10 women will be beaten, raped, abused or mutilated in their lifetimes.

The UN General Assembly designated 25 November as the International Day for the Elimination of Violence against Women in a 1999 resolution inviting governments, international organizations and non-governmental organizations (NGOs) to “organize activities designed to raise public awareness of the problem on that day.”

The day harks to the 25 November 1960 assassination of the three Mirabal sisters, who were political activists in the Dominican Republic, on orders of Dominican ruler Rafael Trujillo. This year’s theme, “A promise is A Promise” is a call from the UN to Governments and leaders to translate international promises into concrete national action.

“Violence stems from social attitudes that belittle women and girls. It is tolerated through indifference, ignorance and fear of speaking out. And it thrives where families and communities pressure women to suffer in silence,” Mr. Ban said, calling on countries to address structural patterns of discrimination and redouble their efforts to empower women.

Mr. Ban also praised the Assembly’s Third Committee for passing its first-ever resolution on eliminating the harmful practice of female genital mutilation and said he looked forward to its adoption by the Assembly, which would represent “a major step forward in protecting women and girls and ending impunity for this practice.”

He also welcomed the recent support from governments for his UNiTE to End Violence against Women campaign, launched in 2008, which gathers a host of UN agencies and offices to galvanize action across the UN system to prevent and punish violence against women.

During the commemoration, the Executive Director of the UN Entity for Gender Equality and the Empowerment of Women (UN Women), Michelle Bachelet, underlined that implementing national policies will require concrete action plans from policymakers and should also involve women in all aspects of society.

“We need to enforce and implement new and improved national laws and action plans that provide for safe houses, free hotline services and free legal and medical aid to survivors,” she said. “We need to guarantee the right to sexual and reproductive health. We need education programmes that teach human rights, equality and mutual respect. We need increasing numbers of women in politics, law enforcement, and peacekeeping forces. We need equal economic opportunities and decent jobs for women and young female graduates.

“This requires decisive and courageous leaders to translate these international promises into tangible national actions and to make a true difference in the lives of women and girls,” she added. 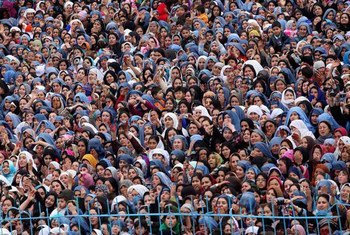 25 November 2012
Secretary-General Ban Ki-moon is leading a United Nations call on world leaders to “make good” on pledges they have made to end violence against women, a scourge that affects millions of women and girls worldwide.