MONUSCO
MONUSCO peacekeepers evacuate children following the capture of Goma in the Democratic Republic of the Congo (DRC) by M23 (November 2012).

28 November 2012
The Security Council today extended the arms embargo and other sanctions imposed against armed rebel groups in the Democratic Republic of the Congo (DRC), while expressing its intention to consider additional targeted sanctions against the leadership of the M23, the rebel fighters that recently occupied the eastern provincial capital of Goma.

In a unanimously adopted resolution, the Council extended until 1 February 2014, the sanctions that were first introduced in 2003 as the DRC reached the end of a brutal civil war that engulfed the vast country on and off for five years and is estimated to have killed as many as five million people.

The sanctions comprise an arms embargo against armed groups that are not part of the Government’s integrated army or police units following the end of the civil war, and also a travel ban and asset freeze against individuals or entities that have violated the embargo or are otherwise designated.

The Council also requested Secretary-General Ban Ki-moon to renew the mandate of the group of experts monitoring these measures until 1 February 2014.

The resolution also contained strong condemnation of the M23 soldiers, who mutinied from the DRC national army in April, and which occupied Goma, the capital of North Kivu, last week after launching a new wave of attacks that have uprooted more than 140,000 civilians.

The Council demanded that the M23 and other armed groups “cease immediately all forms of violence and other destabilizing activities” and reiterated its demand that any and all outside support to the M23 stop without delay.

It also expressed its intention to consider additional targeted sanctions against the M23 leadership, those providing external support to the group, and those who violate the sanctions regime and the arms embargo.

Last night the Council was briefed in a closed-door session by Chef de Cabinet Susana Malcorra and Under-Secretary-General for Peacekeeping Operations Hervé Ladsous on the latest developments in eastern DRC.

Mr. Ban sent Ms. Malcorra to the region last week as his personal emissary to maintain contact and dialogue with key actors. With the agreement of the leaders of the DRC, Rwanda and Uganda, she met Sultani Makenga, the head of the M23’s military wing, to convey the Secretary-General’s concerns about the deteriorating humanitarian situation as well as reported human rights violations. She encouraged him to stop the fighting and pursue his objective through political dialogue and lay down the arms.

Mr. Ladsous told reporters after the Council session that there are “indications” that M23 elements were possibly starting to withdraw from Goma, but that these reports still needed to be confirmed. Meanwhile, the UN Organization Stabilization Mission in the DRC (MONUSCO) is still in control of the airport in Goma and continues daily patrols throughout the city.

MONUSCO reported today that there are signs that the M23 are preparing to withdraw from Goma, in accordance with terms of the communiqué from the weekend meeting of the International Conference on the Great Lakes Region (ICGLR).

“However, the Mission reports that there is not yet any major movement by M23 out of Goma,” UN spokesperson Eduardo del Buey told reporters, adding that the situation in the city is relatively calm.

The UN today dispatched its chief military adviser, General Babacar Gaye, to the Great Lakes region to discuss with stakeholders a number of issues that came out of the recent ICGLR meeting, such as the implementation of the 20-kilometre Neutral Zone to which the M23 is supposed to withdraw and the concept of the International Neutral Force. 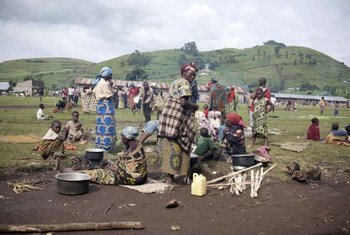