20 November 2012
United Nations Secretary-General Ban Ki-moon today praised the role that cooperatives play as catalysts of inclusive development and their capacity to empower communities by creating jobs and generating incomes.

During a ceremony to close the International Year of Cooperatives at UN Headquarters in New York, Mr. Ban also highlighted the contributions that cooperatives make to achieve sustainable livelihoods and social protection for many people in developing countries.

“We know there continues to be a hunger for policies and approaches that address social and economic goals that go beyond a one-dimensional bottom line,” Mr. Ban said in a message delivered on his behalf. “By emphasizing core values, cooperatives help advance a vision that embraces social objectives into the business model.”

Cooperatives – member-driven business enterprises in which decisions balance the pursuit of profit with the needs and interests of members and their communities – have been found to generate significant financial turnover. In October, the UN General Assembly declared 2012 as the International Year of Cooperatives, with the theme ‘Promoting Cooperatives Beyond 2012,’ to highlight their role in development.

Governments, civil society and representatives of cooperatives, from various sectors, gathered at UN Headquarters over the past two days to mark its closing and share the major outcomes from the year as well as lessons learned from cooperatives around the world, with the aim of influencing policy dialogues on development.

“As a strong partner in development, the cooperative movement works with the United Nations every day to empower people, enhance human dignity and help achieve the Millennium Development Goals (MDGs),” Mr. Ban said, referring to the anti-poverty targets set to expire on 2015.

In his remarks, Mr. Ban also noted how cooperatives can help mobilize youth by providing them with their own productive enterprises and facilitating engagement in their communities.

Events to mark the closing of the International Year at UN Headquarters included an interactive panel discussion on global food security and the role of cooperatives took place, a special event featuring a forum on cooperatives and youth, and a news conference.

The world’s largest 300 cooperatives generated revenues of $1.6 trillion and employ nearly 100 million people worldwide, according to the International Cooperative Alliance. A majority of the organizations surveyed were in the insurance and food and agriculture sectors.

In recent years, cooperatives exhibited an ability to withstand tests brought by market failures, as was the case during the economic crisis endured by Europe in 2011. Additionally, agricultural cooperatives have an increasing role to play in future action plans for global food security, according to the European Research Institute on Cooperative and Social Enterprises. 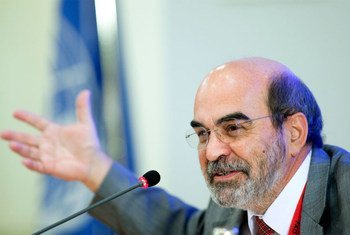 24 January 2012
Cooperatives and producer organizations will be increasingly important in efforts to eliminate hunger and reduce poverty, the head of the United Nations Food and Agriculture Organization (FAO) said today.