20 November 2012
Marking Universal Children's Day today, the United Nations children's agency released a study forecasting just a four per cent increase in the global population of children by 2025, but adding that child population-growth will shift significantly to countries in the South.

By 2050 one in every three births will be African, compared to only one in ten in 1950, according to just one of the findings in UNICEF's Generation 2025 and beyond: The critical importance of understanding demographic trends for children of the 21st century.

Almost one in three children under the age of 18 will also be African, the study says, though under-five deaths will continue to increasingly occur in sub-Saharan Africa, particularly in pockets of poverty and marginalization of heavily populated, low-income countries, and in least developed nations.

Overall, demographic shifts involving children will present policy makers and planners with “major challenges” in the decades following the 2015 deadline for achieving the anti-poverty goals known as the Millennium Development Goals (MDGs), which the international community set in 2000 to dramatically reduce poverty, UNICEF said in a press release.

Launched by the General Assembly in 1954, the Universal Children's Day is aimed at having countries focus on the welfare of the world's children as they promote the ideals of the UN Charter. The day also harks to when the Assembly adopted the Declaration of the Rights of the Child in 1959, and the Convention on the Rights of the Child in 1989 – both on the date of 20 November.

The study found that the United States is the only high-income country projected to have an increasing proportion of children by 2025.

“What is important is whether the world, as it prepares for the post-2015 agenda, takes account of this fundamental and unprecedented shift,” said a co-author of the study, David Anthony of UNICEF. “We must do everything possible so these children get an equal chance to survive, develop and reach their full potential.”

Co-author Danzhen You of UNICEF highlighted the need to “safeguard” children in a way that their rights are “respected and upheld.” UNICEF said this was especially necessary as the aging global population increases pressure to shift resources away from children.

“Children do not vote,” Mr. You said. “Their voices are often not heard when governments make decisions about funding.”

“Though China and India will continue to have a major share of the world's population, in absolute terms, Nigeria will see the highest increase in its under-18 population of any country, adding 31 million children, a rise of 41 per cent, between 2010 and 2025,” the study says. “At the same time, Nigeria will account for one in every eight deaths among under-18s.”

“For least developed countries, serious consideration must be given to how to meet the needs of children, especially in health and education,” UNICEF said.

The study notes that population growth is such that children will make up 90 per cent of the next billion people – expected by 2025 after the world's population reached seven billion in October, 2011.

The paper's recommendations include targeting investments to areas where children will be born; focusing on neglected groups, especially in high-population, middle-income countries; reaching the poorest and most isolated households; and urgently tackling the issue of old age dependency.

Separately, five UN experts on children’s rights marked the Day by calling for governments to adopt more active measures to protect children from all forms of violence, prevent the perpetration of crimes against children and to bring to justice those responsible for child sexual exploitation and for the recruitment and use of children in armed conflict.

They also highlighted the urgency of achieving universal ratification and implementation of the Convention on the Rights of the Child and its three optional protocols.

Established in 1989, the Convention is the first legally binding international instrument incorporating the full range of human rights – civil, cultural, economic, political and social – for people under the age of 18. Its three protocols deal with the sale of children, child prostitution and child pornography; the involvement of children in armed conflict; and, the manner in which children or their representatives can file individual complaints for violations of the rights of children.

“These treaties are key to the safeguard of children’s rights and their effective protection from violence, abuse and exploitation in peace and conflict,” the experts stressed in a joint news release.

The head of the UN Committee on the Rights of the Child, Jean Zermatten, said ratifying the optional protocol related to children and armed conflict was of particular importance to strengthen child rights protection and combat impunity of child rights violations.

The Secretary-General’s Special Representative on Violence against Children, Marta Santos Pais, said that while universal ratification of the Convention is a crucial step to protect children from violence, it is just the start of a “demanding process of implementation.”

The Secretary-General’s Special Representative for Children in Armed Conflict, Leila Zerrougui, noted that there are still 44 States that have not ratified the protocol on child soldiers.

“I urge conflict-affected countries to ratify this treaty as a matter of urgency, and those at peace and with no standing armies to follow suit, in a global effort to end the inhuman practice of child recruitment and use,” she added.

Countries should also boost efforts to protect children from sexual exploitation, which persists in all regions at alarming levels, noted the UN Special Rapporteur on the sale of children, child prostitution and child pornography, Naja Maalla M’jid.

“These legal instruments are critical to our efforts to protect all children, everywhere,” added the Chief of Child Protection at the UN Children’s Fund (UNICEF), Susan Bissell. “Incorporating these standards into national legal frameworks, and raising awareness about them are all part of a process of social change that is so critically important.” 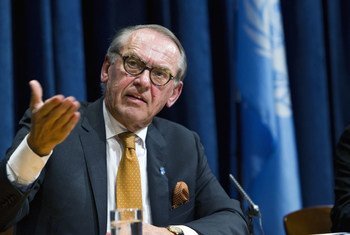 15 October 2012
A key United Nations committee today launched a four-yearly review of the Organization’s development activities with a top official calling for re-energizing the system to adapt to the new realities of a changing world.