FAO/Rodger Bosch
In Swaziland, a project by FAO, the Government and the European Union is promoting good agricultural practices to help smallholder farmers increase their yields.

14 November 2012
With more than two billion people in so-called dryland countries at risk of hunger due to recurrent drought, conflict and volatile food prices, a United Nations senior official today called on the international community to work closely with these nations to break the cycle of hunger affecting them.

With more than two billion people in so-called dryland countries at risk of hunger due to recurrent drought, conflict and volatile food prices, a United Nations senior official today called on the international community to work closely with these nations to break the cycle of hunger affecting them.

“We are losing the battle against hunger in Africa and the Near East,” the Director-General of the Food and Agriculture Organization (FAO), Jose Graziano da Silva, told participants at the International Conference on Food Security in Drylands, which is being held in Doha, Qatar.

The two-day conference brings together members of governments, academia, civil society and the private sector from 60 countries to discuss food security, water and investment in dryland countries. The gathering seeks to come up with recommendations to boost agricultural production, enhance food security, and increase resilience to future prices shocks.

In his remarks, Mr. Graziano da Silva highlighted the need to improve information on how to support the sustainable management of land and water on drylands, and increase responsible investments in agriculture and rural development.

“Perhaps the most pressing issue being debated today is investments in agriculture,” he said, adding that investments needed to “respect the rights, livelihoods and resources of all those involved, especially the most vulnerable.”

The views on investment expressed during the conference will feed into a two-year global consultation process that will be carried out in the framework of the Committee on World Food Security (CFS), Mr. Graziano da Silva added, to develop principles for responsible investment in agriculture.

Set up in 1974, the CFS is an inter-governmental body that serves as a global platform for discussion on short-term food crises as well as long-term food security issues. The Committee reports annually to the UN Economic and Social Council (ECOSOC).

Mr. Graziano da Silva also emphasized that development in these drylands regions must be inclusive and sustainable, following the commitments made by countries at the UN Conference on Sustainable Development (Rio+20) in Rio de Janeiro, Brazil, earlier this year.

“At the Rio+20 Sustainable Development Conference held last June, the world leaders sent out a clear message that development will not be sustainable while hundreds of millions continue to be excluded, suffering from hunger and extreme poverty,” he said. “If we can find sustainable ways to ensure food security in dryland areas, then we will be well on our way to achieving a ‘zero hunger’ world.” 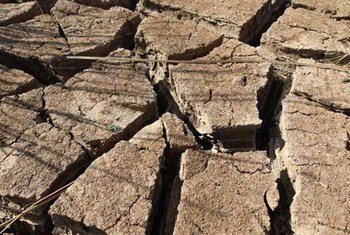 17 June 2012
Top United Nations officials have called for greater efforts to preserve the soils on which human subsistence depends and to halt and reverse land degradation.