17 June 2012
Top United Nations officials have called for greater efforts to preserve the soils on which human subsistence depends and to halt and reverse land degradation.

“Without healthy soil, life on Earth is unsustainable,” Secretary-General Ban Ki-moon says in his message for the World Day to Combat Desertification, which is observed annually on 17 June and falls this year on the eve of the UN Conference on Sustainable Development.

“Global efforts to halt and reverse land degradation are integral to creating the future we want,” Mr. Ban said. “Sustainable land use is a prerequisite for lifting billions from poverty, enabling food and nutrition security, and safeguarding water supplies. It is a cornerstone of sustainable development.”

The upcoming sustainable development conference, to be held from 20 to 22 June in Rio de Janeiro, follows on from the Earth Summit held in the same city in 1992, during which desertification, along with climate change and the loss of biodiversity, were identified as the greatest challenges to sustainable development.

Over 100 heads of State and government, along with thousands of parliamentarians, mayors, UN officials, chief executive officers and civil society leaders will gather at “Rio+20” to shape new policies to promote prosperity, reduce poverty and advance social equity and environmental protection.

“Rio+20 is our opportunity to showcase the many smart and effective land management systems and options that exist or are in the pipeline,” said Mr. Ban, calling on countries to ensure that a commitment to sustainable land management features prominently in the meeting's outcome.

Speaking to reporters in Rio yesterday, Luc Gnacadja, Executive Secretary of the UN Convention to Combat Desertification (UNCCD), called on countries to reiterate their commitment at the conference to combat desertification and achieve zero net land degradation by 2030.

“Efforts to combat desertification by fostering sustainable land management practices have potential co-benefits for climate change adaptation, biodiversity conservation and sustainable use through protecting and restoring the productive potential in drylands,” he stated.

While only three per cent of the Earth is fertile land, 75 billion tonnes of fertile soil are lost every year, Mr. Gnacadja said, making it more essential to focus on policies that will help regenerate the soil.

In a separate message to mark the Day, Mr. Gnacadja noted that, as the global population is growing, competing claims on this finite resource are sharply increasing.

By 2030, the demand for food is expected to grow by 50 per cent and for energy and water for 45 and 30 per cent respectively. The demand for food alone is likely to claim an additional 120 million hectares of productive land – an area equal to the size of South Africa. Unless degraded land is rehabilitated, forests and other lands will have to make way for the required food production.

Mr. Gnacadja said world leaders at Rio+20 need to adopt a stand-alone goal on sustainable land use for all and by all. “To achieve this goal, we need to avoid land degradation in the non-degraded areas and restore soil fertility in the already degraded lands. We also need to avoid deforestation and adopt drought preparedness policies in all drought-prone countries and regions.”

He added that governments should introduce sustainable land-use into their policies, make it their priority and set up national targets to halt land degradation. Businesses should invest in practices that increase efficiency in land-use. Scientists, media and civil society should help spread the word that this goal is crucial.

“Together, we can make this paradigm shift,” said the Executive Secretary.

As part of the events in Rio to mark the Day, the winners of the Land for Life Award will be announced today by the reigning Miss Universe 2011, Leila Lopes, who is also the UNCCD Drylands Ambassador. The award, with a total prize fund of $100,000, recognizes innovations from around the world that show tangible evidence of combating land degradation, but need scaling up. 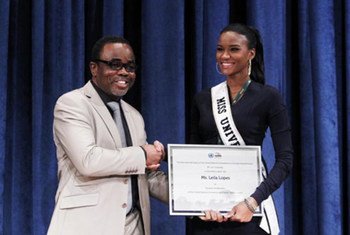 26 March 2012
With land degradation and desertification affecting 1.5 billion people across the globe, 75 per cent of them among the world’s poorest, the United Nations’ most recently-appointed Drylands Ambassador today called for greater efforts to combat the problem.