12 November 2012
Highlighting the impact that the adoption of a new anti-tobacco treaty may have, the United Nations top health official today spoke out on gains and challenges in global efforts to reduce tobacco consumption and exposure to smoke throughout the world – and encouraged further action in these areas.

“I can think of no other undertaking that can make such a huge contribution to better health in every corner of the world. And that includes the health of young children and unborn babies,” the Executive Director of the UN World Health Organization (WHO), Dr. Margaret Chan, said at the Fifth Session of the Conference of the Parties (COP) to the WHO Framework Convention on Tobacco Control (WHO FCTC), taking place in Seoul, the capital of the Republic of Korea.

“This has always been one of the anti-tobacco campaign’s most compelling arguments. Tobacco use is the epidemiological equivalent of a drive-by shooting – it hurts the innocent bystanders as well as those held captive by an addiction that damages their health,” she added.

Tobacco use is responsible for five million, or 12 per cent, of all deaths of adults above the age of 30 globally each year – equivalent to one death every six seconds – noted a WHO mortality report released in March this year.

According to WHO, the Framework Convention on Tobacco Control – an evidence-based treaty that reaffirms the right of all people to the highest standard of health – represents a milestone for the promotion of public health and provides new legal dimensions for international health cooperation. It is the first international treaty negotiated under the health agency’s auspices, and was developed in response to the globalization of the tobacco epidemic.

The number of Parties to the Convention has grown steadily over the years, from the 40 parties that brought the treaty into force in 2005, to 113 at the first session of COP in 2006, and 176 as of today. The COP, the central organ and governing body of the WHO FCTC, is set to review it and further promote its implementation at its session, which began today and ends on Saturday.

“The tobacco industry behaves like a corrosive substance that can eat through, or seep through, any crack or fissure in the armour of our defences. Our response must be to seal all these cracks and fissures, one by one, with science and evidence, supported by instruments for applying this knowledge and backed by the rule of law,” Dr. Chan said.

“This is what you are doing,” she continued. “This is what makes the work of this conference so monumentally important. With the guidelines and recommendations you put forward, and now with the first protocol before you for approval, you are hemming in the enemy, cutting off its options, giving it less space to manoeuvre.”

Amongst a range of items on its agenda, the Fifth Session of COP is also expected to adopt a protocol to eliminate the illicit trade in tobacco products – once adopted, it will be the first protocol to the WHO FCTC and an international treaty in itself.

“The protocol gives the world an orderly rules-based instrument for countering and eventually eliminating a sophisticated international criminal activity that costs a lot, also for health,” Dr. Chan said. “Illicit trade is bad for health because it circumvents measures, like taxes and price increases, that are known to reduce demand. In other words, illicit trade seriously compromises effective implementation of the treaty.”

Citing past experience, the WHO chief noted that the tobacco industry will challenge “the best science, promote arguments that have nothing to do with the facts, and fund front groups to give these arguments a cloak of legitimacy,” as well as engage in other activities, such as lobbying lawmakers and funding plaintiffs to challenge legislation.

Dr. Chan added that in a “recent and most disturbing trend,” efforts to resolve differences between governments and the tobacco industry have moved to the courtroom. In this regard, she lauded recent legal rulings in Australia and Norway which upheld the legality of tough control measures – and noted the support for other countries facing similar interference.

“Of course, industry will have its day and its say in the media. Australia’s law is not a good one, they say. It will be a bonanza for the black market and benefit no one but organized crime, including groups that support terrorists. Let them rattle their sabres,” Dr. Chan said.

“Australia’s law mandating plain packaging, a world first, is based on rigorous research. It peels the glamour off a package full of harm and replaces it with the truth. It will have vast benefits for health,” she added. “I want to thank civil society for doing so much to counter industry’s claims with the facts, to expose their duplicity to the public eye.” 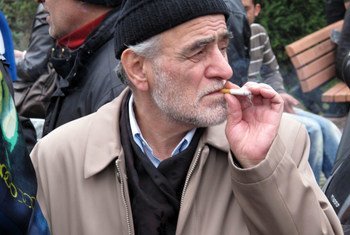