IRIN/Mushfique Wadud
Workers in a factory in Bangladesh that rolls locally produced cigarettes, known as bidis, popular throughout South Asia.

12 November 2012
Efforts to combat the illicit trade in tobacco products around the world received a boost today with the adoption, at a United Nations-backed conference, of a new international treaty on the issue.

“Eradicating illicit trade in tobacco products constitutes a clear win-win situation for governments and their people,” said the Head of the Secretariat of the UN World Health Organization’s Framework Convention on Tobacco Control (WHO FCTC), Dr. Haik Nikogosian.

“The new Protocol establishes what actions constitute unlawful conduct and sets out related enforcement and international cooperation measures, such as licensing, information-sharing and mutual legal assistance that will help counteract and eventually eliminate illicit trade,” he added.

The Protocol to Eliminate Illicit Trade in Tobacco Products commits was adopted at the Fifth Session of the Conference of the Parties (COP) to WHO FCTC, taking place in Seoul, the capital of the Republic of Korea. The gathering began today and ends on Saturday.

In addition to promoting the WHO FCTC’s implementation, the COP – the central organ and governing body of the WHO FCTC – is reviewing the Convention and taking up a range of related issues, including the new protocol.

According to WHO, tobacco use is responsible for five million, or 12 per cent, of all deaths of adults above the age of 30 globally each year – equivalent to one death every six seconds.

The new protocol sets the rules for combating illegal trade through control of the supply chain and international cooperation. It commits countries to establishing, as a central measure, a global tracking and tracing system to reduce the illicit trade of tobacco products.

“The elimination of all forms of illicit trade in tobacco products, including smuggling and illegal manufacturing, is an essential component of tobacco control,” says Ambassador Ricardo Varela, President of the Conference of the Parties to the WHO FCTC. “In adopting this new Protocol today by consensus, countries have reiterated their historic commitment towards protecting the health of their citizens, particularly the young and vulnerable.”

In a news release, WHO noted that the illicit trade in tobacco products is a global problem which undermines health objectives, imposes additional strain on health systems and weakens tax and other measures designed to strengthen tobacco control.

It also leads to substantial revenue losses to governments around the world, while generating vast financial profits for illegal traders, which are often used to fund transnational criminal activity.

After today’s adoption by the COP, the protocol’s procedural steps for it to enter into force are: its opening for signature by the Parties for one year, starting 10 January 2013; followed by a ratification process, in accordance with national law; and, its entry into force 90 days after 40 ratifications.

The protocol was drafted and negotiated by an intergovernmental negotiating body, mandated to undertake this work by the COP at its second session in 2007. After four years of negotiations, the negotiating body held its fifth and final session in March-April this year, during which it reached consensus on the draft protocol. 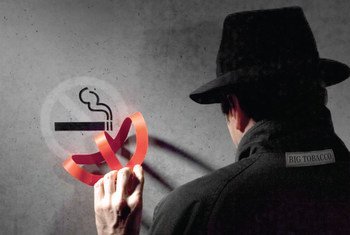 31 May 2012
Top United Nations officials today called on governments to resist the increasingly aggressive steps taken by the tobacco industry to undermine efforts to reduce the global scourge, which kills almost six million people every year.