12 November 2012
The United Nations and its partners today called for greater efforts to eradicate pneumonia, the number one killer of children under the age of five, as they marked the fourth annual World Pneumonia Day.

“We can’t have the reductions in child mortality that we envisage without a concentrated, direct attack on the biggest enemy that children face,” said the Chief of Health for the UN Children’s Fund (UNICEF), Mickey Chopra.

The Day, observed annually on 12 November, seeks to raise awareness of pneumonia as a public health issue and help prevent the millions of avoidable child deaths from the disease that occur each year.

According to the UN World Health Organization (WHO), pneumonia, which is a form of acute respiratory infection that affects the lungs, kills an estimated 1.2 million children under the age of five years every year – more than AIDS, malaria and tuberculosis combined.

A recent report by the UN Commission on Life-Saving Commodities for Women and Children, which is led by UNICEF and the UN Population Fund (UNFPA), estimates that 1.56 million lives can be saved in five years by increasing the availability of the antibiotic amoxicillin, which costs about $0.30 per dose.

Worldwide, vaccination coverage for pneumonia is at about 85 per cent, yet the poorest often miss out, according to UNICEF, which adds that unsanitary, overcrowded living conditions and lack of knowledge of how to protect themselves increase their vulnerability.

“Governments have to take the threat of pneumonia seriously and provide adequate vaccines, diagnostic services, treatment and healthcare, especially among the poorest, or this scourge will continue to rob the world of its children at the rate of almost 3,400 per day. This is unacceptable,” Dr. Chopra said.

“The failure to tackle pneumonia is a double failure,” he added. “Not only are we allowing a treatable and preventable disease to wipe out over a million children a year, we are leaving to its mercy the very people who need help the most – the poorest of the poor.”

World Pneumonia Day is organized by the Global Coalition against Child Pneumonia, a network of more than 140 non-governmental organizations (NGOs), academic institutions, government agencies and foundations, including UN agencies.

According to the Coalition, national leaders and donors must prioritize efforts and investments in proven interventions, including access to vaccines, proper antibiotic treatment, and improved sanitation, as well as the promotion of practices such as exclusive breastfeeding, frequent hand washing, and the use of clean cooking stoves to reduce indoor air pollution. Several of these interventions also help address the second leading killer of children – diarrhoea.

“We know what to do, and we have made great progress – but we must do more. We must scale-up proven solutions and ensure they reach every child in need,” said Secretary-General Ban Ki-moon, who spearheads Every Woman Every Child, an umbrella movement that has leveraged more than $20 billion in new money for women’s and children’s health and aims to save 16 million lives by 2015.

Landmarks in 15 US cities will shine blue lights to raise awareness in their communities of the impact of childhood pneumonia and what US citizens can do to help. Participating buildings include the Wrigley Building in Chicago, the Trump Towers SoHo in New York City and the Pacific Science Center in Seattle, among others. 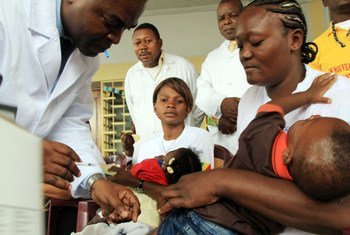 11 October 2012
The Republic of the Congo has taken an important step to improve children’s health by introducing a new vaccine against pneumonia free of charge, the United Nations Children Fund (UNICEF) announced today.