Addressing Assembly, UN expert urges States to do more to protect the right of religious conversion

Addressing Assembly, UN expert urges States to do more to protect the right of religious conversion

25 October 2012
A United Nations independent expert today urged the international community to consistently respect, protect and promote the human right to freedom of religion or belief in the area of conversion.

“The right of conversion and the right not to be forced to convert or reconvert belong to the internal dimension of a person’s religious or belief-related conviction, which is unconditionally protected under international human rights law,” the Special Rapporteur on freedom of religion or belief, Heiner Bielefeldt, said in a news release, issued as he presented a report on his work to the UN General Assembly.

In his report, Mr. Bielefeldt analyses the patterns of abuses that are perpetrated in the name of religious or ideological truth claims in the interest of promoting national identity or protecting societal homogeneity, or under other pretexts such as maintaining political and national security.

“While some undue restrictions on the rights of converts or those trying non-coercively to convert others are undertaken by State agencies, other abuses, including acts of violence, stem from widespread societal prejudices,” the Special Rapporteur said.

“Violations in this sensitive area also include forced conversions or reconversions, again perpetrated either by the State or by non-State actors,” he added. “In addition, the rights of converts or those trying non-coercively to convert others are sometimes questioned in principle.”

In this context, he emphasized, the rights of the child and his or her parents must also be guaranteed.

On the issue of conversion, the independent expert noted that in addition to being exposed to manifestations of social pressure, public contempt and systematic discrimination, converts often face “insurmountable administrative obstacles” when trying to live in conformity with their convictions.

“In some States, converts may also face criminal prosecution, at times even including the death penalty, for such offences as ‘apostasy,’ ‘heresy,’ ‘blasphemy’ or ‘insult’ in respect of a religion or the country’s dominant tradition and values,” he said.”

On the matter of the right not to be forced to convert, Mr. Bielefeldt stated that converts are often exposed to pressure to reconverting to their previous religion. “Such pressure can be undertaken both by Government agencies and by non-State actors, including by directly linking humanitarian aid to an expectation of conversion,” he added.

He noted that he was particularly concerned about pressure or threats experienced by women, sometimes in the context of marriage or marriage negotiations, to convert to the religion of their husband or prospective husband.

On the topic of the right to try to convert others through non-coercive persuasion, Mr. Bielefeldt observed that many States impose tight legislative or administrative restrictions on communicative outreach activities, and that many such restrictions are conceptualised and implemented in a flagrantly discriminatory manner.

“For instance, in the interest of further strengthening the position of the official religion or dominant religion of the country while further marginalizing the situation of minorities,” he said.

He added, “Members of religious communities that have a reputation of being generally engaged in missionary activities may also face societal prejudices that can escalate into paranoia, sometimes even leading to acts of mob violence and killings.”

On the issue of the rights of the child and his or her parents, the Special Rapporteur said he had received reports of repressive measures targeting children of converts or members of religious minorities, including with the purpose of exercising pressure on them and their parents to reconvert to their previous religion or to coerce members of minorities to convert to more socially ‘accepted’ religions or beliefs.

“Such repressive activities may violate the child’s freedom of religion or belief and/or the parents’ right to ensure an education for their children in conformity with their own convictions and in a manner consistent with the evolving capacities of the child,” he said.

In meeting, UN and African Union officials flag need for engagement in Darfur for further progress 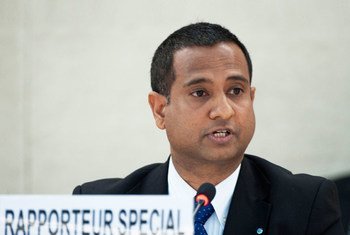 20 September 2012
Two independent United Nations human rights experts have welcomed the release of a pastor in Iran who was charged with apostasy, while voicing deep concern over the arrest and detention of hundreds of Christians in recent years.