25 October 2012
A United Nations independent expert today called on the world body’s General Assembly, as well as civil society, to take action against Israeli and international businesses that are profiting from Israeli settlements in the occupied Palestinian territory.

“My main recommendation is that the businesses highlighted in the report – as well as the many other businesses that are profiting from the Israeli settlement enterprise – should be boycotted, until they bring their operations into line with international human rights and humanitarian law and standards,” the Special Rapporteur on the situation of human rights in the occupied Palestinian territories, Richard Falk, said in a news release issued as he presented a report on his work to the Assembly.

Highlighting the activities of companies such as Caterpillar Incorporated of the United States, Veolia Environment of France, G4S of the United Kingdom, the Dexia Group of Belgium, Ahava of Israel, the Volvo Group of Sweden, the Riwal Holding Group of the Netherlands, Elbit Systems of Israel, Hewlett Packard of the USA, Mehadrin of Israel, Motorola of the USA, Assa Abloy of Sweden, and Cemex of Mexico, the Special Rapporteur noted that a wide range of Israeli and international businesses are involved in the establishment and maintenance of the Israeli settlements.

“All Israeli settlements in the West Bank, including East Jerusalem, have been established in clear violation of international law,” said Mr. Falk.

“Yet today Israeli settlements control over 40 percent of the West Bank and between 500,000 and 600,000 Israeli citizens are living in Palestinian territory,” he added. “In the last 12 months alone, the settler population has increased by over 15,000 persons.”

He drew the Assembly’s attention to developing international law and standards concerning businesses and human rights, including the UN Global Compact and the UN Guiding Principles on Businesses and Human Rights.

“The principles outlined in the Global Compact are clear,” Mr. Falk said. “Businesses should support and respect the protection of internationally proclaimed human rights and ensure that they are not complicit in human rights abuses.”

The Global Compact is a strategic policy initiative for businesses that are committed to aligning their operations and strategies with ten universally accepted principles in the areas of human rights, labour, environment and anti-corruption. The Guiding Principles, endorsed by the Human Rights Council, provide a global standard for preventing and addressing the risk of adverse impacts on human rights linked to business activity.

Mr. Falk also noted guidance developed by the International Committee of the Red Cross that points to the prospect of corporate and individual criminal responsibility for violations committed during a situation of armed conflict.

“In short, businesses should not breach international humanitarian law provisions. Nor should they be complicit in any breaches. If they do, they may be subject to criminal or civil liability. And this liability can be extended to individual employees of such businesses,” the Special Rapporteur said in presenting his report.

Mr. Falk noted that he had written to all the businesses mentioned in his report, and that positive responses were received from some of them.

“It is encouraging to be informed that Assa Abloy has moved its Mul-T-Locks factory from the West Bank to Israel, and that the Dexia Group, G4S, and Cemex are looking for ways to bring their operations into line with their commitments under the UN Global Compact,” he added.

In meeting, UN and African Union officials flag need for engagement in Darfur for further progress 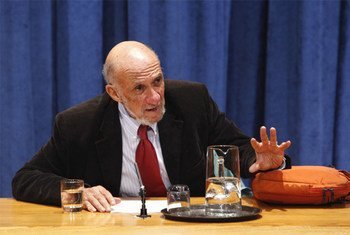 30 August 2012
The decision by an Israeli judge to dismiss a civil lawsuit brought forward by the family of a deceased young American peace activist is shocking and sad, an independent United Nations human rights expert said today, condemning the ruling as a victory for Israeli impunity.