“No single person was more instrumental in the founding of the United Nations than Franklin Delano Roosevelt,” the Secretary-General told a ceremony at the dedication of a public space – the Four Freedoms Park – in honour of the US leader on Roosevelt Island in New York’s East River within sight of the UN Headquarters complex on the island of Manhattan.

“He had the vision. He helped develop the plans. He even gave us our name,” Mr. Ban said of the man who first coined the term United Nations to depict the post-war world he envisioned in a 1942 declaration by the 26 countries then fighting against Germany, Italy and Japan.

President Roosevelt died on 12 April 1945. The United Nations officially came into existence on 24 October 1945, when the UN Charter had been ratified by a number of countries. In the lead-up to that moment, representatives of 50 countries had conferred in the US city of San Francisco to draw up the Charter.

The park’s name, Four Freedoms Park, derives directly from that vision in which Mr. Roosevelt enshrined freedom of speech, freedom of worship, freedom from want and freedom from fear as rights to be enjoyed by everybody everywhere on the face of the Earth.

“President Roosevelt was driven by a global vision. He understood that an individual’s dreams were not restricted by that individual’s passport. He knew that aspirations could not be confined to national borders,” Mr. Ban said. “And he believed deeply that leaders everywhere must help people everywhere live those dreams.”

“He did not live long enough to see the United Nations come to pass. Yet his words guide us every day as we seek to advance peace and security, promote development, and uphold human rights around the world,” the Secretary-General noted.

Among those attending the dedication of the Park, a four-acre triangular expanse of green flanked by 120 trees that lead to a bronze bust of the President Roosevelt on a white granite open-air plaza, were New York City’s Mayor Michael Bloomberg, former US President Bill Clinton and Anna Eleanor Roosevelt, a granddaughter of the late president. 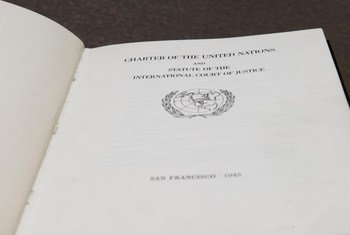 18 January 2012
As the world faces a ‘pivotal moment’ of new economic and environmental challenges, the principles and origins that led to the United Nations remain more important than ever to help countries build the future they want, Secretary-General Ban Ki-moon said today.