UN Photo/Mark Garten
A close view of the original copy of the Charter of the United Nations which is kept in the United States National Archives in Washington D.C.

18 January 2012
As the world faces a ‘pivotal moment’ of new economic and environmental challenges, the principles and origins that led to the United Nations remain more important than ever to help countries build the future they want, Secretary-General Ban Ki-moon said today.

“What began as a necessity to defend liberty and human rights is today a vital instrument of common progress across a broad agenda of aspiration and need,” Mr. Ban said in his message to commemorate the 70th anniversary of the “Declaration by United Nations,” a diplomatic initiative by 26 countries which fought against Germany, Italy and Japan during the Second World War.

The declaration, signed in January 1942, called for an end to totalitarianism and military regimes and resulted in a range of military and political initiatives leading to the UN Conference on International Organization that created the UN Charter in San Francisco in 1945.

“Seventy years ago, President Roosevelt coined a term that found resonance with 26 States. Today, 193 States are carrying forward the idea and the machinery,” Mr. Ban said, referring to US President Franklin D. Roosevelt’s speech, in which he used the term ‘United Nations’ for the first time to refer to the allies that were fighting the axis powers.

“We have made important progress since the Second World War, but I am keenly aware of the distance still to travel and the catastrophes – economic, environmental, human – that lurk if we fall short,” Mr. Ban said in his remarks, which were delivered by Margaret Anstee, former UN Under-Secretary-General, to scholars, policy-makers and former UN officials who gathered at Lancaster House in London to discuss the changes in human rights and war fighting since the signing of the declaration.

“I commend this important meeting and welcome your efforts to delve more deeply into the wartime origins of the United Nations. That pre-history was a period in which states and peoples responded to grave threats with remarkable vision and resolve.

“The contemporary echoes are clear,” Mr. Ban said, adding that the world is facing once again a similar shift with new challenges such as climate change, economic instability, terrorism and organized crime.

“Future generations may well describe this period as an inflection point, when the contours of a new world began to take shape. Amid the unfolding trends and events, the United Nations has sought to uphold the values and ideals enshrined in its Charter,” he said, stressing that there remains much to be done to tackle these new challenges.

“In a world of 7 billion – and with global population expected to increase by another 500 million in just the next five years – we must all do more as a global society. Let us learn what more there is to know as we commemorate the UN’s origins on the road to the 70th anniversary of the Charter; and let us all work together today to realize the UN’s full potential in building the future we want.”

With launch of oral history collection, UN sheds light into its past 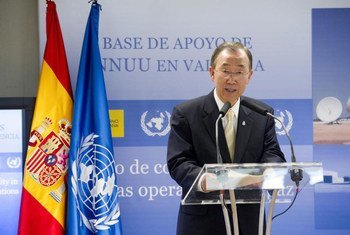 2 December 2011
Secretary-General Ban Ki-moon today urged leaders to respond to people’s calls for the right to build a better future for themselves, stressing that women and youth, in particular, must be helped to enjoy lives of dignity, equality and opportunity.