18 October 2012
Despite the growing number of nature reserves, national parks and other protected areas around the world, half of the globe’s richest biodiversity zones remain entirely unprotected, according to a United Nations report presented today.

Amongst the report’s other main findings are that protected areas are being managed in a more equitable way, with a greater role for indigenous communities – but current investment in protected areas is only around half of what is needed to support endangered species, protect threatened habitats and deliver the full benefits that sustainably-managed protected areas can deliver.

“Protected areas contain some 15 per cent of the world’s carbon stock and support the livelihoods of over one billion people, making them a crucial factor in supporting biodiversity, ecosystem services and human livelihoods,” said the Executive Director of the UN Environment Programme (UNEP), Achim Steiner, in a news release on the report.

The report was presented at the 11th Conference of the Parties to the UN Convention on Biological Diversity (CDB COP 11), taking place in Indian city of Hyderabad, at which, according to UNEP, it received the official backing of countries as a major contribution towards tracking progress on global efforts to increase protected areas.

The Conference of the Parties is the governing body of the UN Convention on Biological Diversity (CBD), and advances implementation of the Convention through the decisions it takes at its periodic meetings such as the one taking place in India.

“This new report provides not only the fact and figures required by decision-makers, but outlines ways to overcome fundamental challenges in the management of protected areas,” added Mr. Steiner. “It highlights the key actions required to meet international goals, and to harness the multiple economic and environmental benefits that sustainably managed protected areas can provide.”

Two years ago, countries set a goal under the CBD that by 2020, at least 17 per cent of the world’s terrestrial areas and 10 per cent of marine areas would be equitably managed and conserved.

The Protected Planet Report 2012 says that protected areas have increased in number by almost 60 per cent, and in area by just under 50 per cent, since 1990. But, it states, poor management, under-funding and a lack of critical data on protected areas mean that the world is making insufficient progress towards the 2020 goals.

UNEP’s Protected Planet Report 2012 recommends the following key steps to ensure that the 2020 targets on protected areas can be met:

According to the most recent figures, just over 12 per cent of the world’s terrestrial areas are thought to be protected today.

To meet the CBD target of 17 per cent, an additional six million square kilometres of land and inland waters would have to be recognized as protected by world Governments – an area more than twice the size of Argentina.

Marine protected areas are lagging even further behind, according to the report. Around 1.6 per cent of the global ocean area is protected, mostly in near-coastal areas.

To meet the CBD target of 10 per cent, an additional eight million square kilometres of marine and coastal areas would need to be recognized as protected – an area just over the size of Australia. However, the UNEP study states that the number of very large marine protected areas has grown significantly in recent years. 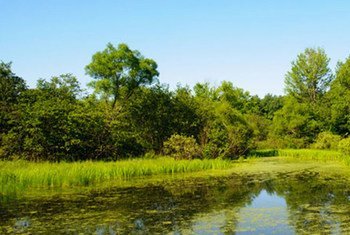 16 October 2012
Governments must recognize the vital economic and environmental role that wetlands play in supporting human life and biodiversity, according to a United Nations-backed report released today, which also stresses that their protection is essential for countries to transition into resource-efficient and sustainable economies.