UNEP
Vital economic and environmental role of wetlands must be recognized to avoid further degradation and losses.
16 October 2012

Governments must recognize the vital economic and environmental role that wetlands play in supporting human life and biodiversity, according to a United Nations-backed report released today, which also stresses that their protection is essential for countries to transition into resource-efficient and sustainable economies.

“Policies and decisions often do not take into account the many services that wetlands provide – thus leading to the rapid degradation and loss of wetlands globally,” the Executive Director of the UN Environment Programme (UNEP), Achim Steiner, said in a news release on the report, entitled ‘The Economics of Ecosystems and Biodiversity for Water and Wetlands.’

“There is an urgent need to put wetlands and water-related ecosystem services at the heart of water management in order to meet the social, economic and environmental needs of a global population predicted to reach nine billion by 2050,” he added.

Half of the world’s wetlands were lost during the twentieth century – due mainly to factors such as intensive agricultural production, unsustainable water extraction for domestic and industrial use, urbanization, infrastructure development and pollution, according to UNEP. The continuing degradation of wetlands is resulting in significant economic burdens on communities, countries and businesses.

The report was produced by The Economics of Ecosystems and Biodiversity (TEEB), a UNEP-hosted initiative that seeks to draw attention to the global economic benefits of biodiversity, drawing together expertise from the fields of science, economics and policy to enable practical actions moving forward.

The report provides a series of recommendations that would slow and ultimately halt the degradation of wetlands. These include: integrating the wetlands into national decision-making processes, ensuring that wetland services are fully considered as solutions for land and water management, committing to protect biodiversity in this ecosystem, and ensuring the participation of communities, including indigenous peoples, on managing solutions for the wetlands. It also encourages businesses to assess the risks of their operations in the wetlands as well as their dependency on this valuable resource.

At a global level, the report says there is a need to ensure that the role and value of water and wetlands are integrated into implementation of the Strategic Plan for Biodiversity 2011-2020, the UN Framework Convention on Climate Change (UNFCCC) and the set of anti-poverty targets known as the Millennium Development Goals (MDGs), among other international agreements.

The Ramsar Convention, an intergovernmental initiative on the wetlands, also contributed to the development of the report which received financial support from the Norwegian, Swiss and Finnish Governments. Other organizations that contributed the report include the Institute for European Environmental Policy, the Secretariat of the Convention on Biological Diversity, Wetlands International, the Helmholtz Centre for Environmental Research, and the International Union for Conservation of Nature. 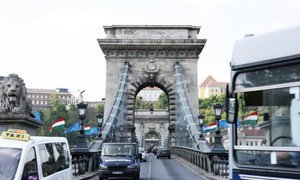 With only seven per cent of goods transported on inland waterways in the European Union (EU), “considerable efforts” are still required by the region’s governments and the transport industry to increase this number and relieve congested road and rail networks, according to a UN report.