UN Photo/Jean-Marc Ferré
Head of the Working Group on the issue of discrimination against women in law and pratice Kamala Chandrakirna.
18 October 2012

A United Nations group of independent experts today urged countries to eliminate laws that classify adultery as a criminal offence, noting that they give rise to punishments that range from fines to flogging and death by stoning or hanging.

A United Nations group of independent experts today urged countries to eliminate laws that classify adultery as a criminal offence, noting that they give rise to punishments that range from fines to flogging and death by stoning or hanging.

“Adultery must not be classified as a criminal offence at all,” said Kamala Chandrakirana, who currently heads the Working Group on the issue of discrimination against women in law and in practice.

Established by the Geneva-based Human Rights Council in September 2010, the Working Group’s focus is charged with identifying ways to eliminate laws that discriminate against women or are discriminatory to them in terms of implementation or impact, and helping States to ensure greater empowerment for women in all fields.

Ms. Chandrakirana noted that in many countries, adultery continues to be a crime punishable with severe penalties. “Provisions in penal codes often do not treat women and men equally and establish harsher sanctions for women, and in some countries, rules of evidence value women’s testimony as half that of a man’s,” she said.

In a statement issued today at the end of the Working Group’s fifth session in Geneva, the Working Group’s experts recognized that in accordance with some traditions, customs and different legal systems, adultery may constitute a civil offence with legal consequences in divorce cases.

However, they stressed that this does not mean it is an offence that is punishable by imprisonment, stoning or hanging, among other practices.

The group of experts warned that maintaining adultery as a criminal offence – even when it applies to both women and men – means in practice that women mainly will continue to face extreme vulnerabilities, and violation of their human rights to dignity, privacy and equality, given continuing discrimination against them.

“We urge all Governments which retain criminalization of adultery and allow the imposition of fines, imprisonment, flogging, death by stoning or hanging for convictions of adultery, to repeal any such provisions and to ensure that all accused enjoy their rights to a fair trial,” Ms. Chandrakirana said.

She added that criminalizing sexual relations between consenting adults violates their right to privacy and is an infringement of the International Covenant on Civil and Political Rights, which was adopted by the UN General Assembly almost two decades ago and commits members to respect the right to life as well as freedom of religion, speech and assembly.

“States parties to the Covenant are obliged to ensure that domestic norms take account of developments in international law,” she said.

In their statement, the experts also pointed to countries like Guatemala, which has struck down legislation punishing marital infidelity on the basis of the Constitution’s equality guarantees as well as human rights treaties, and Uganda, which overturned an adultery law penalizing women for adultery but leaving their male partners unpunished.

♦ Receive daily updates directly in your inbox - Subscribe here to a topic.
♦ Download the UN News app for your iOS or Android devices.
women|discrimination 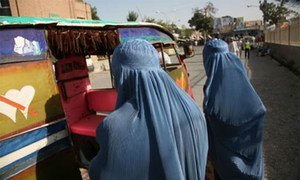 The United Nations today welcomed a public statement by Afghan officials clarifying that it is not a criminal offence for women and girls to ‘run away,’ stressing that official declarations like this can go a long way in protecting those who are forced to flee their homes to escape violence.