2 October 2012
Chinese Premier Wen Jiabao was today presented with a top United Nations award for his efforts to increase food production, contributing significantly to reducing the number of people around the world suffering from extreme poverty.

“Let me give you one number that illustrates the magnitude of this contribution,” the Director-General of the UN Food and Agriculture Organization (FAO), José Graziano da Silva, said in presenting the agency's highest award, the Agricola Medal, to Mr. Wen at a ceremony in the Great Hall of the People in Beijing, attended by 150 senior Government officials, representatives of Chinese farmers and academia.

“The number of poor in the world fell from 2.3 billion in 1990 to 1.5 billion in 2008, a reduction of 34.1 per cent. A world without China would have progressed much more slowly, with a reduction of only about 11 per cent of the number of poor over the same period,” he added, calling the award a tribute to Mr. Wen’s life-long dedication to promoting food security and poverty reduction in China and the world.

The premier stressed that without modernizing China’s agricultural and rural societies there would be no modernization of the national economy as a whole, noting that the country has had a ninth consecutive increase of crop production and that the latest grain harvest was 150 millions tonnes larger than in 2003.

He said these achievements not only contribute to social and economic development and improving people's lives in China but also a significant contribution to international food security – a view echoed by Mr. Graziano da Silva, who underlined the global impact of China's efforts to feed its own people and end extreme poverty.

This is the second time the FAO has given the Agricola Medal to a Chinese statesman. The first time was to President Jiang Zemin in 1998.

During his visit to Beijing, Mr. Graziano da Silva also signed an agreement laying out terms for joint actions and projects over a five-year period to bolster joint efforts to defeat hunger, increase agricultural production and improve rural livelihoods.

According to FAO, China has already established a $30 million trust fund under the FAO South-South Cooperation framework, and has placed more than 900 Chinese experts in Africa, Asia, the Caribbean and the South Pacific to work closely with farmers, extension workers and local institutions for at least two years to introduce advanced farming techniques. The programme will expand under the terms of the agreement signed today. 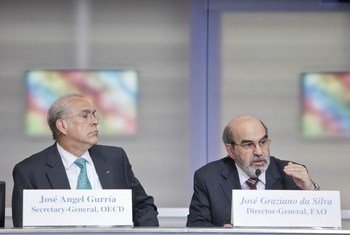 11 July 2012
Higher demand for food due to population growth, urban migration and other factors will require countries to increase their productivity, according to a new report co-authored by the United Nations, which warns that without more supplies, prices will rise significantly.