29 September 2012
The inability of nuclear weapons to guarantee a country’s security or independence was highlighted in the speech of Kazakhstan’s Acting Minister of Foreign Affairs, Kairat Umarov, to the United Nations General Assembly today.

The inability of nuclear weapons to guarantee a country’s security or independence was highlighted in the speech of Kazakhstan’s Acting Minister of Foreign Affairs, Kairat Umarov, to the United Nations General Assembly today.

“The threat of proliferation of nuclear weapons and technology, along with the spectre of their acquisition and use by terrorist entities, has been one of the most daunting challenges to humanity,” the Foreign Affairs Minister told the 67th Assembly’s General Debate at UN Headquarters in New York today.

“It is our strong view that the possession of weapons of mass destruction is not a guarantee of security or greater independence. Kazakhstan's own record goes to show that countries reap huge benefits from the renunciation of nuclear weapons,” he added.

The Central Asian nation closed down its nuclear weapons site Semipalatinsk, one of the largest test sites in the world and located in the country’s north-east, in 1991. As a result of this, the Foreign Affairs Minister noted, Kazakhstan has “won more friends and [has] become a more prosperous, stable and influential country.”

“This year, we will complete the project to enhance physical security of the former Semipalatinsk test site,” he said. “We view this project, which is being implemented jointly with the United States and Russia, as our significant contribution to the global non-proliferation regime.”

Mr. Umarov said that Kazakhstan fully supports a proposal by Secretary-General Ban Ki-moon to adopt a nuclear weapons convention, noting the suggestion of his country’s president that, as an important step in that direction, the United Nations should adopt a Universal Declaration of a Nuclear Weapon-Free World.

In relation to Afghanistan, Mr. Umarov noted his country’s active involvement in multilateral cooperation efforts there, stating that for these efforts to be successful, its economic situation should be a priority.

“The efforts to stabilize the situation should be bolstered by reforms aimed at sustainable development and the improvement of socio-economic indicators in the country, its level of education and other human standards,” he said.

Other topics covered in his remarks to the Assembly included the crisis in Syria, energy security, intercultural dialogue and human rights, to which Kazakhstan “attaches special importance.” The Central Asian is seeking a seat on the Geneva-based UN Human Rights Council for the 2012-2015 period.

“If elected, Kazakhstan will participate, with a full sense of responsibility, in the proceedings of that important human rights body, on the basis of an open, impartial, non-politicized and mutually respectful dialogue between the Member States of the United Nations,” Mr. Umarov said.

The Kazakh Foreign Minister is one of scores of heads of State and government and other high-level officials who are presenting their views and comments on issues of individual national and international relevance at the Assembly’s General Debate, which ends on 1 October. 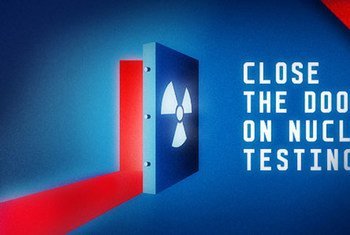 29 August 2012
Secretary-General Ban Ki-moon today stressed the importance of a global ban on nuclear tests to achieve a safer and more secure world, calling on all States that have not yet done so to sign and ratify the international treaty that seeks to achieve this goal.