29 September 2012
Speakers representing a trio of Southeast Asian countries called for reform of United Nations bodies today, with Cambodia’s Deputy Prime Minister and Singapore’s Foreign Affairs Minister framing their arguments for change mainly around development and economic urgencies, and Malaysia’s Foreign Affairs Minister focusing more on what he characterized as failures of the UN Security Council.

The significance of the Group of 20 (G20) major economies featured in the speeches of both Singaporean Foreign Affairs Minister K. Shanmugam and Cambodian Deputy Prime Minister Hor Namhong to the 67th General Assembly’s high-level debate, at UN Headquarters in New York.

Mr. Shanmugam cited the G-20 as being one of the “smaller and exclusive groups,” beyond the United Nations, to which countries had turned because of a “growing frustration” over the inability of existing multilateral institutions to deal with various global challenges, among them rising income disparities, climate change and worries about food security.

But, he said, the world body ultimately had the advantage of being able to come up with global solutions because of its universal membership. “We should therefore support ongoing and new efforts aimed at strengthening the UN, instead of denigrating it,” Mr. Shanmugam said.

In outlining his country’s vision for a reformed UN, the Foreign Minister said Singapore wanted to see an “effective system of international law and resilient mechanisms for peaceful dispute settlement.”

He stated that this would “provide a platform for states under threat to bring their problems before these mechanisms with confidence, rather than trying to resolve them by force.”

Mr. Shanmugam also emphasized the importance of the rule of law at the international level, saying it was “particularly important” for the survival of small states such as Singapore for a “predicable and stable rule-based system” to exist.

For his part, the Cambodian Deputy Prime Minister said the G-20 had a “crucial role” to play in meeting a series of global challenges, among them rising oil and food prices, while noting that a more empowered General Assembly could play a “leading role” in addressing the world’s problems.

“The reform of the UN will no doubt render it more effective in preserving international peace, security and stability, as well as in realizing justice in the international economic system,” said Deputy Prime Minister Hor, who also serves as his country’s Minister of Foreign Affairs and International Cooperation.

In addition to empowering the Assembly and calling for an expansion of the 15-member Security Council, Mr. Hor said the 54-member UN Economic and Social Council (ECOSOC) should be “strengthened to effectively coordinate international cooperation and efforts to tackle social and economic challenges.”

In his General Assembly address, Malaysia’s Foreign Affairs Minister, Anifah Aman, addressed the topics of UN reform and the rule of law while, while also commenting on the Israeli-Palestinian conflict and the question of Palestinian membership of the UN.

“This is just one of a host of reasons… why the United Nations, especially the Security Council, needs to be reformed,” he said. Citing in particular the Council, Mr. Aman added that there were “so many instances (where) it has failed to take action when action is needed the most.” He ascribed the inaction on the “veto power conferred to the five permanent members.”

Mr. Aman also shared Malaysia’s position on what he called the “distasteful and insulting” anti-Islam video, made by a US citizen, which recently sparked protests in a number of predominantly Muslim countries around the world.

“While we condemn the irresponsible actions of those who intentionally incite hatred, we are equally saddened by the violent reactions that ensured,” he said, mentioning the deaths of the US Ambassador to Libya, Christopher Stevens, and others, in the eastern Libya city of Benghazi, during demonstrations believed to be linked to the video.

He called for the events to spark a deeper questioning of the relationship between freedom of expression and social responsibilities. “A line should be drawn when the prejudicial effect outweighs everything else,” Mr. Aman said.

Cambodia’s Deputy Prime Minister Hor also expressed his country’s “regrets” over the deaths of Ambassador Stevens and others, but added that Cambodia also understood the “legitimate anger” linked to “disregarding… the Muslim religion.”

The Southeast Asian officials are among scores of heads of state and government, and other high-level officials, who are presenting their views and comments on issues of individual national and international relevance at the Assembly’s General Debate, which ends on 1 October. 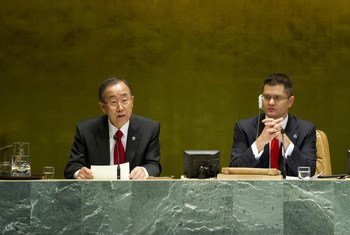