29 September 2012
The need for reform of the United Nations, illicit drug trafficking and the situation in Afghanistan were among the topics covered in the speech by Tajikistan’s Foreign Minister, Hamrokhon Zarifi, to the UN General Assembly today.

The need for reform of the United Nations, illicit drug trafficking and the situation in Afghanistan were among the topics covered in the speech by Tajikistan’s Foreign Minister, Hamrokhon Zarifi, to the UN General Assembly today.

“The recent developments in the world proved once again that it is impossible to address global and regional issues without strengthening the central role of the United Nations in the international affairs and without collective initiatives in world politics, with due respect of the norms of international law,” the Foreign Minister told the 67th Assembly’s General Debate, at UN Headquarters in New York.

“In this regard, it is becoming obvious that it is necessary to carry out a rational reform of the Organization, as a result of which the renewed United Nations will emerge capable to respond to the developments in the world in a quick and adequate manner, and to effectively meet numerous global challenges and threats of a new generation,” he added.

Turning to his country’s southern neighbour, Afghanistan – which will acquire “an exclusive importance not only for the region but for the world” with the departure of the International Security Assistance Force in 2014 – Mr. Zarifi said that its social and economic development will be “the key” for ensuring its stable peace.

“For this reason, the international assistance rendered to Afghanistan should be aimed, first and foremost, at its utmost economic rehabilitation, further strengthening of its social sphere, job creation, etc,” he said. “In this regard, realization of projects on construction of railroads, motorways, power transmission lines, gas pipelines and etc. that connect Afghanistan with Tajikistan and other countries of the region is of utmost importance.”

The prevention of illicit drug trafficking, the Foreign Minister stated, demands cooperation from the international community. Due to it shared borders with Afghanistan – a major drug-producing country – an estimated 15 per cent of all of Afghanistan’s opiates and 20 per cent of its heroin is trafficked through Tajikistan, according to estimates of the UN Office on Drugs and Crime (UNODC).

“It is essential that the international community unite the measures aimed at reducing both the demand and supply of drugs, and integrate the efforts undertaken at the national level into the international strategy for drug control,” he said, adding that Tajikistan has started developing a new anti-narcotics strategy for the 2013-2020 period.

In relation to human rights, Mr.Zarifi noted its place, alongside peace, security and development, as one of the pillars of the work of the United Nations, and how Tajikistan seeks a bigger role in this area with a seat on the Geneva-based Human Rights Council for the 2015-2017 period.

“Being a signatory to the major international treaties on human rights, Tajikistan, in a consistent manner, undertakes relevant measures aimed at ensuring protection and promotion of human rights in the country,” the Foreign Minister said.

Other topics touched upon in his statement to the Assembly included respect for cultural and religious diversity, the harm caused by anti-personnel mines and sustainable development.

The Tajik Foreign Minister is one of scores of heads of State and government and other high-level officials who are presenting their views and comments on issues of individual national and international relevance at the Assembly’s General Debate, which ends on 1 October. 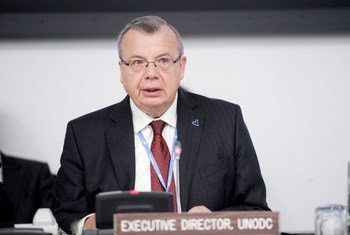 31 May 2012
With 90 per cent of the world’s illicit opiates being produced in Afghanistan, the neighbouring frontline states in Central Asia have a key role to play in tackling drug trafficking, the United Nations top anti-drugs and crime official said today, during a visit to Tajikistan.