“The world’s well-being and power is increasingly in the hands of market and financial elites,” Nicaragua’s Foreign Minister, Samuel Santos Lopez, told the General Assembly today as he highlighted the shrinking role of the State in public affairs and the need for reform or reinvention at the world body.

“The world’s well-being and power is increasingly in the hands of market and financial elites,” Nicaragua’s Foreign Minister, Samuel Santos Lopez, told the General Assembly today as he highlighted the shrinking role of the State in public affairs and the need for reform or reinvention at the world body.

“The market is present in all areas: the economy, politics, culture, society, the individual arena and the mass media of communication,” he told the 67th Assembly’s General Debate, taking place at UN Headquarters in New York.

He noted that this had led to a “rapidly decreasing” capacity of governments to solve the most pressing problems and puts into doubt the effectiveness of international organizations in the conduct of global affairs.

The world in 1945, post-World War II, is a world which no longer exists, he said, adding that Nicaragua is thus spearheading an initiative for reform of the United Nations system, “or better yet, its reinvention.”

The reforms that have been proposed so far have not progressed due to “the politics of some permanent members of the Security Council,” he said, noting that Nicaragua called on all Member States to lend support to this “democratization” of the world body.

As Central America has become a transit zone for drugs, the Nicaraguan official recalled the need for economic support for Central American States to combat drug trafficking and organized crime. Countries in the region, he said, are forced “to allocate enormous resources for interdiction and interception of drugs,” resources that could be invested in social development.

“In these times of crisis, we can see that we run the risk of not reaching all the Millennium Development Goals (MDGs) we proposed to reach before 2015. We cannot allow this to happen,” the Foreign Minister urged, referring to the eight MDGs, agreed on by world leaders at a UN summit in 2000, which set specific targets on poverty alleviation, education and environmental stability, in addition to other areas.

In his statement to the Assembly, the Foreign Minister went on to appeal for support to the peace process in Colombia and called for promoting a solution to the situation in Iran. Calling the situation in Syria unacceptable, he said it posed “the risk of generalized war in the Middle East”.

He also emphasized the need for the international community to deeply transform the world economy, politics, society and culture.

The Nicaraguan Foreign Minister is one of scores of world leaders and other high-level officials presenting their views and comments on issues of individual national and international relevance at the Assembly’s General Debate, which ends on 1 October. 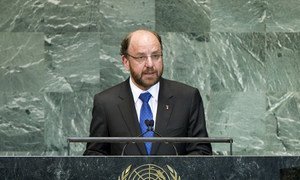 Taking the podium at the United Nations General Assembly today, the Foreign Ministers of Chile and Peru called for Security Council reform, with Chile proposing that its permanent members forego the right of veto in situations involving crimes against humanity and other heinous offences.