Taking the podium at the United Nations General Assembly today, the Foreign Ministers of Chile and Peru called for Security Council reform, with Chile proposing that its permanent members forego the right of veto in situations involving crimes against humanity and other heinous offences.

“I would like to reiterate our opposition to the veto,” Chile’s Foreign Minister, Alfredo Moreno Charme, said of the prerogative of the five permanent members of the 15-member body – China, France, Russia, United Kingdom and United States – whereby a negative vote from one of them can override the affirmative votes of all 14 others.

“However, given that it exists, Chile joins the call that there be no recourse to it in situations of crimes against humanity, war crimes, genocide or ethnic cleansing,” he told the 67th Assembly on the fourth day of its annual General Debate, taking place at UN Headquarters in New York.

“The countries which enjoy the right of veto a great responsibility and the duty to use it with moderation and transparency in order to try to resolve crises, leaving aside national positions and ideologies which checkmate the system and make it ineffectual,” he said.

The Foreign Minister reiterated his country’s support for expanding the Council with both permanent and non-permanent seats so that it ensures due regional representation, strengthens the body and enforces transparency of its work methods.

“We need the United Nations… to overcome the current architecture of the post-war world of 1945,” he said. “The current scenario demands a greater presence of developing countries in taking responsibility for preserving peace and security. We regret the limited progress in negotiations on this subject.”

He noted that the current structure, with the five permanent Council members wielding veto powers, had been unable to resolve a number of international disputes.

Among these, he included the ongoing conflict in Syria, the plight of the Palestinian people, economic sanctions imposed on Cuba, and the stand-off between the United Kingdom and Argentina over the issue of the Falkland Islands (Malvinas).

“To overcome these and other shortcomings and deficiencies of the current international order, it is urgent to adopt measures within our own organization,” he said. “The most urgent one being probably the reform of the Security Council, designed to transform this body into a more efficient, transparent, democratic and representative forum.”

The Foreign Minister emphasized his country’s “faith” in multilateralism, saying his country has demonstrated this, not least through its adherence to international conventions. Among several examples of what he described as Peru’s continuing “commitment to multiculturalism and integration,” he cited his country’s term, since June, chairing the Presidency Pro Tempore of the South American Union of Nations (UNASUR).

“We want to consolidate South America as a zone of peace and of viability of a democratic citizenship without exclusions,” he said. “It is already a nuclear weapon-free zone, and we hope that it soon comes to be free from anti-personnel mines. We need that the money currently spent in arms be redirected towards development and the defeat of poverty and inequality.”

The two Foreign Ministers are among scores of world leaders and other high-level officials presenting their views and comments on issues of individual national and international relevance at the Assembly’s General Debate, which ends on 1 October. 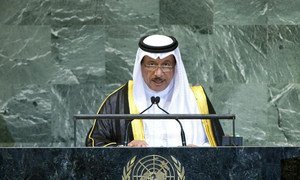