28 September 2012
The Security Council must adapt to a dynamic and changing world, Germany’s Foreign Minister, Guido Westerwelle, told the United Nations General Assembly today in a speech calling for greater representation in the UN body.

“We will weaken the Security Council if we fail to adapt it to today’s world,” Mr. Westerwelle told the gathered delegates in his address to the 67th Assembly’s General Debate, which began at UN Headquarters in New York on Tuesday.

Referring to the ongoing crisis in Syria, the German Foreign Minister added that the Security Council had failed to live up to its responsibilities to protect the people there and called on the Council to break its diplomatic deadlock.

In addition, Mr. Westerwelle warned that the escalating violence in the Middle Eastern country risked engulfing the entire region. Over 18,000 Syrians have been killed and hundreds of thousands of others driven from their homes since the uprising against the regime of President Bashar al-Assad erupted 18 months ago. The UN estimates that an additional 2.5 million Syrians urgently need humanitarian aid.

“As we Germans have experienced what it is to lack freedom in the course of our own history, we will always stand by those who, wherever they are in the world, call for freedom,” Mr. Westerwelle added. “Our values and our interests compel us to take the side of those around the world who are fighting peacefully for freedom, dignity, and self-determination.”

The German official’s calls for Security Council reform were echoed by his European neighbour, the Foreign Minister of the Netherlands, Uri Rosenthal, who noted that emerging powers “rightly ask for more influence referring to new political and economic realities.”

“The Security Council should be reformed taking these realities into account,” he said, while acknowledging that the emerging powers’ new role in the global economy should also be reflected in the relative contributions made by Member States to the UN budget.

Mentioning the Dutch city of The Hague, home to the International Court of Justice, Mr. Rosenthal also emphasized the global need for a stronger international legal order which, he said, would promote freedom, human rights, reinforce the responsibility to protect and help prevent atrocities.

In his remarks to the General Debate, Malta’s Deputy Prime Minister, Tonio Borg, drew attention to the spread of democracy and freedom across North Africa and throughout the region, suggesting that a new era was dawning for the entire Mediterranean basin and urging the international community “to ensure that the people of Syria are not abandoned to a tragic fate.”

He pointed to the upcoming regional summit, the 5+5 Heads of State and Government Meeting of the Western Mediterranean Forum, to be hosted by Malta, as an opportunity to address the wave of democratic reform occurring across the region.

“I hope that the Malta Summit will meet the aspirations of the people of the Northern and Southern basin of the Mediterranean,” he added. “We cannot fail in this regard. We owe it to our peoples.”

On a similar note, speaking at yesterday’s general debate session, Norway’s Minister of Foreign Affairs, Espen Barth Eide, urged the General Assembly to support the ongoing struggles for freedom in Syria and the occupied Palestinian territory.

“People are only truly free when they are able to choose the way they want to live their lives,” Mr. Barth Eide said. “Some people can only dream of these freedoms. But when they do exist, they are often the results of collective action – in families, communities, regions and states, and at the global level.”

Pointing to the ongoing violence in Syria, he said that the country’s crisis had started with a call for freedom but had spiralled into a conflict characterized by mass atrocities and brutality.

Mr. Barth Eide noted that at the UN’s founding in San Francisco in 1945, the leader of the Norwegian delegation – and eventual first UN Secretary-General – Trygve Lie, had supported the Security Council permanent members’ right to veto. Now, he argued, the time had come for the Council “to put away outdated ideas of zero-sum games and spheres of influence and to strive and seek a common position.”

“Do not allow narrow self-interest to block the winds of change that the vast majority of this Assembly applauds,” he added.

Turning to the question of Palestine, an issue which was at the centre of last year’s general debate, Mr. Barth Eide stated that there was “significant fatigue” among the Palestinian population and warned that time was “running short” for the international community to resolve the matter of Palestinian statehood.

“Negotiations remain the key to achieve this,” he stated. “They must start now.”

At the same time, Mr. Barth Eide reserved some words of praise for the political developments in Myanmar, where reforms initiated by President Thein Sein, were “opening the door” for freedom and democracy and for the Sudan and South Sudan’s signing of a peace agreement bringing the two countries back from the brink of war.

The European officials are among scores other high-level officials and world leaders presenting their views and comments on issues of individual national and international relevance at the Assembly’s General Debate, which ends on 1 October.

At UN General Debate, Russian Foreign Minister calls for return to Geneva accord on Syria 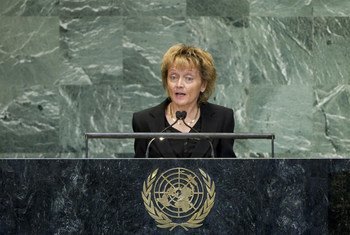 25 September 2012
Switzerland today called on the United Nations to update its processes to better tackle the host of problems besetting the world, from climate change, food security and water scarcity to migration, organised crime, terrorism and weapons proliferation.