27 September 2012
At the United Nations General Assembly today, Israel’s Prime Minister Benjamin Netanyahu called on the international community to set a “clear red line” for taking action, by next summer at the latest, to prevent Iran from completing the second stage of nuclear enrichment necessary to make a bomb.

“I believe that faced with a clear red line, Iran will back down,” he said of the nuclear programme that Iran says is for the peaceful energy production but which Israel, along with the United States and many other countries, believes is aimed at producing a nuclear bomb.

“This will give more time for sanctions and diplomacy to convince Iran to dismantle its nuclear weapons programme altogether,” he said. “Israel is in discussions with the United States over this issue, and I am confident that we can chart a path forward together.”

Linking his timetable to the vulnerability of potential Iranian targets and voicing his fear that Iran would use a nuclear bomb to eliminate his nation, the Israeli leader divided bomb production into three stages – low, medium and high enriched uranium.

Iran, Prime Minister Netanyahu said in his remarks to the 67th Assembly’s General Debate, taking place at UN Headquarters in New York, has already completed the first stage and is now well into the second stage.

“By next spring, at most by next summer at current enrichment rates, they will have finished the medium enrichment and move on to the final stage,” he added. “The red line should be drawn right here. Before Iran completes the second stage of nuclear enrichment necessary to make a bomb.

“Before Iran gets to a point where it's a few months away or a few weeks away from amassing enough enriched uranium to make a nuclear weapon. Each day, that point is getting closer. That's why I speak today with such a sense of urgency. And that's why everyone should have a sense of urgency.”

Prime Minister Netanyahu’s timetable is predicated on the possibility of Iran concealing the final stage of bomb production, consisting of making the fuse, assembling the bomb and preparing the warhead, which he said could be done possibly within a few months and concealed in a small workshop in Iran, a country half the size of Europe.

Such installations require thousands of centrifuges spinning in tandem in very big industrial plants, which are visible and still vulnerable, he noted.

Stressing that the “the hour is getting late, very late,” and that the only way to prevent Iran from making a bomb is to prevent it from amassing enough enriched uranium to make one, the Israeli Prime Minister voiced the fear he felt that Iran would use such a weapon to try to eliminate Israel.

He quoted former Iranian President Hashemi Rafsanjani as saying: “The use of even one nuclear bomb inside Israel will destroy everything, however it would only harm the Islamic world. It is not irrational to contemplate such an eventuality.”

Prime Minister Netanyahu noted that a Middle East scholar, Bernard Lewis, has said that for the Ayatollahs of Iran, mutually assured destruction – the strategy that kept the United States and Soviet Union from using nuclear weapons against each other during the Cold War – is an inducement, and not a deterrent.

Iran's apocalyptic leaders believe that a medieval holy man will reappear in the wake of a devastating Holy War, thereby ensuring that their brand of radical Islam will rule the earth, he quoted Mr. Lewis as saying, adding that that this approach is guiding Iran’s policies and actions.

Iran's rulers repeatedly deny the Holocaust and call for Israel's destruction almost on a daily basis, as they did again this week from UN Headquarters, the Prime Minister said, referring to statements made by Iran’s President Mahmoud Ahmadinejad when he addressed the General Assembly.

He also cited Iranian statements that Israel has no roots in the Middle East, stressing that the Jewish people have resided in the Holy Land for over 3,000 years, continuing to do so even at times when Jews were mostly scattered around the world.

“Red lines don't lead to war; red lines prevent war,” the Israeli leader declared, saying that history – with its terrible death toll from the Holocaust and World War II – would have been much different had a red line been set against Germany’s Adolf Hitler in the 1930s.

Turning to the Palestinian question, the Israeli Prime Minister called for negotiations to reach a mutual compromise, noting that the Palestinian Authority President, Mahmoud Abbas, had addressed the Assembly less than an hour before he did, to accuse Israel of rejecting the internationally endorsed two-state solution and announce that he was seeking non-Member State status.

“I say to him and I say to you: We won't solve our conflict with libellous speeches at the UN,” Prime Minister Netanyahu said. “That's not the way to solve it. We won't solve our conflict with unilateral declarations of statehood. We have to sit together, negotiate together, and reach a mutual compromise, in which a demilitarized Palestinian state recognizes the one and only Jewish State.”

issues of individual national and international relevance at the Assembly’s General Debate, which ends on 1 October.

Prime Minister Netanyahu also met with Secretary-General Ban Ki-moon on Thursday. The UN chief expressed his deep concern over the stalemate in the Middle East peace process and encouraged Israel to take more steps to bolster the Palestinian Authority and ease the restrictions in the occupied Palestinian territory, including Gaza.

The two men exchanged views on the regional situation, including the implications of the Syrian crisis, and they also discussed the Iranian nuclear issue, with Mr. Ban reiterating his view that the responsibility lies with the Government of Iran to answer questions related to it and address concerns expressed by the International Atomic Energy Agency (IAEA).

At UN, Iraqi Vice President warns of dangers of providing arms to parties in Syrian conflict 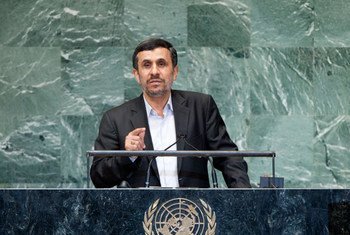 26 September 2012
Iranian President Mahmoud Ahmadinejad today called for a “just and fair” new world order and said the United Nations lacks the efficiency to bring it about, offering the help of the Non-Aligned Movement (NAM), which his country currently heads, to achieve the required changes.