26 September 2012
Iranian President Mahmoud Ahmadinejad today called for a “just and fair” new world order and said the United Nations lacks the efficiency to bring it about, offering the help of the Non-Aligned Movement (NAM), which his country currently heads, to achieve the required changes.

“If this inefficiency persists, nations will lose hope in the global structures to defend their rights,” he told the 67th General Assembly on the second day its annual General Debate. “If the UN is not restructured, international interactions and the spirit of collective global cooperation will be tarnished and the standing of the UN will be damaged.”

President Ahmadinejad said the existence of veto rights in the Security Council and the monopolization of power in the 15-member body have made it nearly impossible to defend the rights of nations. The Council’s five permanent members – China, France, Russia, United Kingdom and United States – have veto rights.

“The issue of UN-restructuring is very vital and is a need that has been emphasized time and again by the representatives of nations, a goal that has not yet been accomplished,” he said, citing unilateralism, double standards and the imposition of the theory of survival of the fittest by “self-proclaimed centres of power” as problems that need to be rectified.

“I would like to urge the honourable members of the United Nations and the Secretary-General and his colleagues to place the issue on their agenda and devise an appropriate mechanism to make it happen,” the Iranian President said. “NAM stands ready to aid the UN in this essential endeavour.”

The 120-member NAM, founded during the Cold War by countries that wanted to belong to neither the capitalist nor communist blocs, held its 16th summit last month in Tehran, where Secretary-General Ban Ki-moon highlighted the strong partnership between it and the UN.

President Ahmadinejad made no direct reference to Iran’s nuclear programme, which it says is for the peaceful purposes of energy production but which many countries fear is aimed at attaining nuclear weapons capability.

He cited, however, “continued threats by the uncivilized Zionists to resort to military action against our great nation” as a clear example of the current world order of unilateralism and intimidation. ‘Zionists’ is reportedly the term he uses for Israel which, according to media reports, is prepared to use force to try to prevent Iran from reaching nuclear weapons capability.

In another reference to Israel, the Iranian leader called it a “fake government” imposed on occupied Palestine, and criticized “the hegemonic policies and actions of world Zionism.”

He referred to the “tragic incident” of 11 September 2001, when terrorist attacks in the United States claimed nearly 3,000 lives, and he criticized the killing of the self-declared mastermind, Osama bin Laden, in an American commando raid in Pakistan last year, apparently casting doubt on the US version of the terrorist attacks.

Imagine for a moment, President Ahmadinejad said, “if instead of killing and throwing the culprit into the sea without trial or without informing the world and people of America, an independent fact-finding team had been formed to make the general public ware of the truth behind the incident and prepare for bringing to justice the perpetrators.”

The Iranian leader is one of scores of heads of State and government and other high-level officials who are presenting their views and comments on issues of individual national and international relevance at the Assembly’s General Debate, which ends on 1 October. 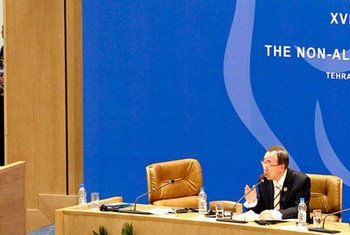 30 August 2012
Secretary-General Ban Ki-moon today highlighted the strong partnership between the United Nations and the international grouping of over 100 countries known as the Non-Aligned Movement (NAM), while also stressing the need for both bodies to rise to the challenge of responding to the needs of those they represent.