The UN Guidance for Effective Mediation draws extensively from the Organization’s own experience, as well as the insights of Member States and others, and is considered a foundational document for UN mediation efforts and for all interested in the peaceful resolution of disputes.

“This Guidance is a relevant reference document not just for mediators but for all actors involved in mediation,” Deputy Secretary-General Jan Eliasson said at the high-level launch held in New York City on the sidelines of the General Debate of the 67th session of the General Assembly.

“This includes the conflict parties themselves, as it is important to generate a common understanding of the parameters of mediation and what is potentially involved,” he added.

The launch was organized in cooperation with the Group of Friends of Mediation – a grouping of UN Member States co-chaired by Finland and Turkey who have taken an active and supportive interest in developing the UN’s conflict mediation capacities.

“The launch of the UN Guidance for Effective Mediation could not come at a more opportune moment,” Vuk Jeremic, President of the General Assembly, said at the launch.

Given the current global realities, the danger of new conflicts erupting, the challenge of preventing those which are gathering, and the difficulties of resolving existing ones, are “pervasive,” he noted.

“I believe this Guidance can be put in the service of efforts to strengthen international peace and security, as mediation offers a legitimate, democratic and consensual instrument for conflict prevention and resolution,” said Mr. Jeremic.

The Guidance was initially released in August 2012 by Secretary-General Ban Ki-moon as an annex of a broader report on trends and capacities in conflict mediation issued at the request of the General Assembly. 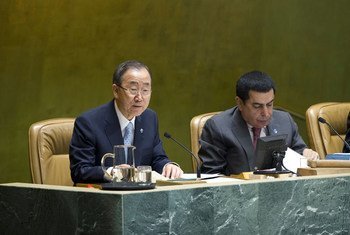 13 September 2012
The United Nations is much better positioned today to help settle disputes and conflicts peacefully, Secretary-General Ban Ki-moon says, while adding that there is still more that can be done to strengthen the world body’s mediation capacity.