27 September 2012
Stressing that the entry into force of the United Nations-backed treaty banning nuclear tests would be a milestone in advancing the cause of nuclear disarmament, Secretary-General Ban Ki-moon today renewed his call on those States that have not yet signed on to do so without delay.

“To countries that remain outside of this treaty, I say: you are failing to live up to your responsibility as a member of the international community,” Mr. Ban told the Sixth Ministerial Meeting of the Parties to the Comprehensive Nuclear-Test-Ban Treaty (CTBT).

At the same time, he noted that the vast majority of countries have endorsed the treaty. “To them I say: you have wisely chosen security over threats, peace over belligerence, and the global good over a narrow vision of national interests. You are showing true leadership.”

The CTBT is the only treaty to ban all nuclear tests, everywhere and by everyone. The treaty also has a unique global alarm system to detect nuclear explosions. Out of a total listed number of 195 States, 183 have so far signed the treaty and 157 have ratified it.

Mr. Ban specifically called on those States whose ratification is required for the treaty to enter into force – also known as the Annex 2 States – to ratify the CTBT. They are China, the Democratic People’s Republic of Korea, Egypt, India, Iran, Israel, Pakistan and the United States.

“In order to advance the process, I wrote to each of these countries in June. I appealed to them to follow Indonesia’s example and accelerate their ratification process. I urged them to consider how adherence to this treaty could enhance security, promote stability and build confidence throughout the world,” said the Secretary-General.

He added that leaders have a standing offer from him to personally visit and answer any concerns or doubts they may have about the CTBT.

The norm against testing is strong, the Secretary-General said, noting that countries that have made the decision to test nuclear weapons have provoked “unified and principled” opposition.

“But a non-binding norm is not enough. History teaches us that moratoria can and will be broken. The CTBT must become universal law,” he stated. In the meantime, he urged all States to refrain from the use of new nuclear weapon technologies or from any action that would defeat the object and purpose of the CTBT. 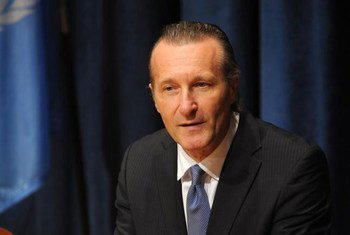 24 September 2012
Senior government officials will press for the early entry into force of the Comprehensive Nuclear-Test-Ban Treaty (CTBT) when they meet later this week at United Nations Headquarters in New York, where the treaty first opened for signature 16 years ago today.