13 September 2012
The United Nations is much better positioned today to help settle disputes and conflicts peacefully, Secretary-General Ban Ki-moon says, while adding that there is still more that can be done to strengthen the world body’s mediation capacity.

“I am pleased to report that we are making real progress,” Mr. Ban told a meeting of the General Assembly on mediation, noting that with the support of Member States, the UN has worked hard to enhance its readiness to implement and support mediation processes.

In a report to the Assembly one year after it adopted its first resolution on mediation, Mr. Ban writes that the UN has field presences with mediation capacity closer to actual and potential conflict zones, and is able to quickly deploy political officers as well as electoral, constitutional, security and other experts to conflict areas.

The world body’s network of political missions and regional offices works alongside regional and sub-regional organizations, as well as with governments which have a key interest in resolving conflicts.

In addition, the UN’s conflict prevention and mediation efforts are flexible and relatively inexpensive, involving small civilian operations calibrated to meet the specific dynamics involved, and have achieved impressive results, he notes.

“The United Nations has come a long way in adapting mediation to contemporary challenges. While progress has been made, there is potential to do much more,” he says in the report, highlighting the need to better link national and local capacities to the mediation efforts of the international community, as well as to further promote women’s participation in mediation processes.

The report also includes the UN Guidance for Effective Mediation, which draws extensively from the Organization’s own experience, as well as the insights of Member States and others and which will be launched at a special high-level event on 27 September.

The Guidance outlines eight key “mediation fundamentals” that require the mediator’s consideration for an effective process. These are: preparedness, consent, impartiality, inclusivity, national ownership, international law and normative frameworks, coherence, coordination and complementarity among mediation efforts, and the development of quality peace agreements.

“The result is a foundational document for UN mediation efforts and for all interested in the peaceful resolution of disputes. I am pleased that the General Assembly is encouraging all mediation actors to make full use of it,” Mr. Ban told the 193-member body.

He added that mediation can only succeed where there is a commitment to solving a conflict through dialogue and real leverage to back it up.

“Regrettably, some of the tragedies before us show once again the terrible price that is paid for the absence of international unity or political will from the parties,” the UN chief said. “And while not all conflicts may be amenable to mediation, we must remain engaged and constantly look for opportunities for dialogue.

“Our commitment to resolve disputes and conflicts peacefully is a central tenet of the Charter of the United Nations, and mediation is a key tool,” he added.

Ahead of the meeting, Mr. Ban attended the screening in the General Assembly Hall of a documentary on the theme of forgiveness and reconciliation, at which he said the greatest barriers in life are not walls around buildings, but walls around hearts. “And yet, societies cannot grow until those walls come down,” he stated.

In his remarks to the meeting on mediation, the President of the General Assembly, Nassir Abdulaziz Al-Nasser, stressed the importance of benefiting as much as possible from the comparative advantages of different actors, since every situation is unique. “This requires seamless cooperation among all,” he said.

“Today, it is no secret that some disputes are either emanating from cultural or religious differences, misperceptions and misunderstandings, or gets deepened due to different methodologies and ideologies.

“On such situations, the role of the Alliance could be particularly critical,” he said, referring to the UN Alliance of Civilizations, which was launched in 2005 through the initiative of Spain and Turkey, under UN auspices, to promote better cross-cultural relations worldwide.

The President added that some past and current crises have shown that if mediation and other peaceful means are used at a timely and early stage, it will be cost-effective, lead to saving innocent lives, and alleviate the suffering of civilians, particularly women and children.

“It is necessary that we learn from our experiences and employ mediation in a more efficient manner, because it is the best way out in a crisis situation, if used as a preventive measure,” Mr. Al-Nasser said. 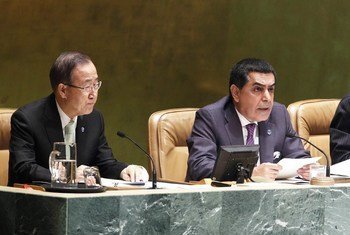 23 May 2012
Mediation is a valuable and effective tool for conflict prevention and the peaceful settlement of disputes, top United Nations officials stressed today, while also highlighting the need to strengthen the world body, which plays a central role in such efforts.