25 September 2012
Spain today reaffirmed the “fundamental role” of the United Nations in solving the world’s problems, called for reforms to make it more efficient, and pledged to continue contributing to its peacekeeping operations.

“Our commitment with the United Nations remains strong, actively participating in those initiatives that we have been supporting in the past few years because we believe that they are key to achieve the future that we desire,” Spain’s Prime Minister Mariano Rajoy told the 67th General Assembly on the opening day of its General Debate.

“This year we have moved towards a more peaceful, just and sustainable world,” the Prime Minister said in a wide-ranging speech that covered current crises facing the world, including Syria, Afghanistan, Somalia and the Middle East. “However, as reflected in the cases I just mentioned, there is still much to do.”

Appealing for an end to violence in Syria, he called on President Bashar Al-Assad to make way to a political process that will allow a peaceful resolution of the conflict in which over 18,000 people have been killed and hundreds of thousands driven from their homes since the uprising against the Government erupted 18 months ago.

“Thousands of innocent victims, the unbearable suffering of civilians and the serious risk of the conflict expanding to neighbouring countries are forcing us to act,” he said.

Prime Minister Rajoy noted that Spain wishes to serve on the Security Council for the years 2015-2016, and said the 15-member body – which many members want to enlarge to bring in more developing countries to permanent seats – needs to adapt to the challenges of the 21st century, building a new Security Council that is more effective, inclusive, representative and responsible to the General Assembly.

“We are facing many challenges,” he concluded. “Spain hopes that when we meet again in 12 months, the list of problems will be shorter and that the United Nations will be more effective and efficient.”

The Spanish leader is one of many heads of State and government and other high-level officials presenting their views and comments on issues of individual national and international relevance at the Assembly’s General Debate, which ends on 1 October.

The Prime Minister also discussed the problems in West Africa’s Sahel region and the humanitarian situation resulting from the Syrian crisis in a separate meeting with Secretary-General Ban Ki-moon, who thanked him for Spain’s support for the UN’s sustainable development goals. 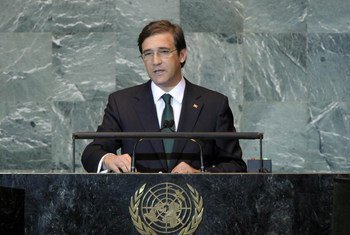 26 September 2011
Portugal has called at the United Nations for concerted efforts to tackle global financial instability and create conditions for economic growth and jobs, stressing the need to correct inequalities and strengthen international monetary security.