25 September 2012
President Demetris Christofias of the Republic of Cyprus today called on Turkish Cypriot leaders to return to talks to reunite the divided island and accused Turkey of provocative behaviour, gunboat diplomacy and trying to alter the country’s ethnic make-up.

“Our commitment remains unchanged. Return to the negotiating table, continue the negotiations in good faith,” he told the United Nations 67th General Assembly on the first day of its General Debate, at UN Headquarters in New York.

He said current the Turkish Cypriot leader, Dervis Eroglu, has abandoned negotiations aimed at setting up a bicommunal, bizonal federation with a single sovereignty, single citizenship and single international personality, with political equality in the Mediterranean island that has been divided since inter-communal violence erupted in 1964.

“Turkey, after invading Cyprus in 1974 continues to occupy, for 38 years, the northern part of the island, maintaining a strong military force and continuing the mass transfer of settlers from Turkey, pursuant to its policy for demographic alteration of the population of my country,” Mr. Christofias declared.

“Turkey continues to violate human rights and fundamental freedoms of tens of thousands of displaced persons, including the usurpation of their property, the rights of the enclaved and the people who lost their loved ones and continue to search for them,” he added.

President Christofias stressed that Turkey’s positive contribution for the two communities to take the unity process forward is crucial.

“Instead, Turkey has been pursuing ‘gunboat diplomacy’ with oft-repeated display of its military strength around Cyprus. Turkey’s alarming behaviour has been escalating since last September when Cyprus proceeded with exploration activities in its exclusive economic zone,” he said. “I call on Turkey, before this esteemed body to cease its provocative behaviour.”

In addition, in his statement to the Debate, the President strongly condemned the violence and massacres of innocent civilians in Syria, calling for their immediate cessation, and appealed for an urgent resumption of Middle East peace talks aimed at the establishment of a free and independent Palestinian State based on the pre-1967 borders while at the same time addressing the legitimate security concerns of Israel.

At General Debate, Georgia calls on UN to help lessen tensions ahead of parliamentary elections 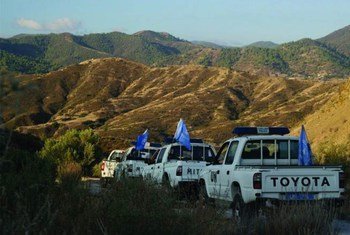 19 July 2012
The United Nations Security Council today extended the United Nations Peacekeeping Force in Cyprus (UNFICYP) until 31 January 2013, and reiterated its call for the leadership of the Greek Cypriot and the Turkish Cypriot communities to accelerate the pace of talks aimed at reunifying the divided Mediterranean island nation.