UN Photo/Rick Bajornas
Secretary-General Ban Ki-moon addresses the High-Level Meeting of the General Assembly on the Rule of Law. At right is Assembly President Vuk Jeremic.

“We reaffirm that human rights, the rule of law and democracy are interlinked and mutually reinforcing and that they belong to the universal and indivisible core values and principles of the United Nations,” stated the Outcome Document, adopted at Monday’s High-Level Meeting of the General Assembly on the Rule of Law.

Heads of State and Government and ministers from nearly 80 nations are attending the meeting, which aims to highlight the essential link between the rule of law at the national and international levels and economic growth, sustainable development and the eradication of poverty and hunger.

“The wider body of international law developed at the United Nations gives the international community a basis to cooperate and peacefully resolve conflicts – and the means to ensure that there is no relapse of fighting,” Secretary-General Ban Ki-moon declared at the start of the meeting, held the day before the start of the 67th General Assembly’s General Debate session.

The UN chief called on Member States to commit to the equal application of the law at both the national and international levels without selectivity, uphold the highest standards of the rule of law in their decision-making, and accept the jurisdiction of the Hague-based International Court of Justice (ICJ), the principal UN judicial organ set up in 1945 to settle legal disputes submitted by States.

States should also strengthen UN initiatives in the rule of law by training police and enhancing the judiciary in fragile and conflict-torn countries around the world, he said.

Addressing the meeting, the General Assembly’s President Vuk Jeremic warned against seeing international law as a utopian aspiration with little relevance to the conduct of world affairs.

“By strictly adhering to the rule of law, we discourage the recourse to war,” he declared. “To be effective, the corpus of international law must be observed by all Member States – great and small, rich and poor alike.”

The Outcome Document called on all States that had not yet done so to accept the jurisdiction of the Hague-based ICC, an independent international organization that is not part of the UN and tries those accused of the most serious crimes of international concern, such as genocide, crimes against humanity and war crimes. So far 121 countries have adhered to the treaty that set up the ICC.

“We commit to ensuring that impunity is not tolerated for genocide, war crimes and crimes against humanity, as well as for violations of international humanitarian law and gross violations of human rights law,” the document declared.

It underscored the sovereign equality of all States, the right to self-determination of peoples under colonial dominion and foreign occupation, non-interference in the internal affairs of States, and respect for human rights and fundamental freedoms without distinction as to race, sex, language or religion.

It called on States to refrain from promulgating unilateral economic, financial and trade measures that impede full economic and social development, particularly in developing countries, and stressed that the independence, impartiality and integrity of the judicial system are crucial.

The document also emphasized the importance of ensuring that women enjoy the benefits of the rule of law in full equality with men, and that children are protected from discrimination, violence, abuse and exploitation.

“Today’s meeting is a milestone – but it is not an end in itself,” Mr. Ban said in concluding his opening remarks. “Our challenge now is to follow up, and continue to deepen and develop the rule of law, this essential foundation for a better future.”

Mr. Tomka noted that only 67 of the UN’s 193 States – or 34 per cent, including only one permanent member of the Security Council – currently accept the ICJ’s compulsory jurisdiction. That compares with 59 per cent in 1948, when 34 of the then 58 UN Member States, including four of the five permanent members of the Security Council, recognized its jurisdiction.

The Administrator of the UN Development Programme (UNDP), Helen Clark, whose organization works on rule of law related programmes in over 100 countries by helping to train judges and lawyers and to strengthen national police forces, stressed the fundamental role the issue plays in national development by protecting women from discrimination and righting the wrongs inflicted on the poor and the marginalized.

“Thus rule of law is at the very heart of what is needed for development efforts to be effective,” she said. “Conversely, shortcomings in the rule of law underlie the exclusion, suffering, and poverty of many people.”

The UN High Commissioner for Human Rights (OHCHR), Navi Pillay, warned that rule of law without human rights is only an empty shell, citing her own experience of growing up in South Africa under the Apartheid regime’s veneer of a ‘rule of law’ based on legislation that institutionalized injustice.

“National action as well as international support to strengthen the rule of law on the ground must be based on the body of international human rights law developed mainly under the auspices of the United Nations,” she said, highlighting the need to end impunity. 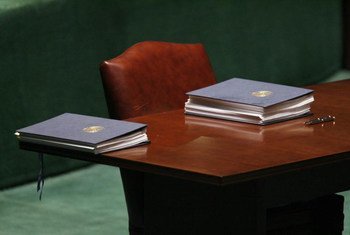