UN Women/Panya Janjir
Recruiting women police officers is key to the rule of law. In this photo, Thai police cadets receive training on ending violence against women and girls.

24 September 2012
United Nations officials today urged countries to implement measures to improve women’s access to and participation in justice systems, stressing that the rule of law can help break down gender barriers.

“Our theme of women’s access to justice reminds me of all the women I have met who suffered terrible crimes, including sexual abuse in wartime,” said Secretary-General Ban Ki-moon in his remarks at an event at UN Headquarters in New York, entitled ‘Strengthening Women’s Access to Justice.’ “But women are not only victims – they are champions for justice.”

The event took place on the sidelines of the High-Level Meeting of the General Assembly on the Rule of Law, which drew heads of State and Government and ministers from nearly 80 nations, with the aim of highlighting the essential link between the rule of law at the national and international levels and economic growth, sustainable development and the eradication of poverty and hunger.

In his remarks, Mr. Ban outlined three commitments that countries must make to ensure women have access to justice systems in their countries, stressing they are “critical, valuable and urgent.” These consist of: repealing laws that discriminate against women and girls, increasing women’s involvement in the justice system, and investing at least 15 per cent of overall rule of law funding to breaking down the barriers to justice for women.

“Increasing women’s participation is not a jobs programme for them – it is a source of power for you and your communities,” Mr. Ban said. “Women have the right to equal access to public administration – and services are better when they reflect both male and female perspectives.”

“Justice for women takes more than new laws and new funding. Ultimately, we need new mindsets,” the Secretary-General added, adding that gender equality must run through the entire development agenda.

According to the UN Entity for Gender Equality and the Empowerment of Women (UN Women), which co-organized the event with the governments of Finland and South Africa, eight in 10 women worldwide do not have access to their country’s formal justice system.

“We need action because the rule of law often rules women out,” said UN Women’s Executive Director, Michelle Bachelet. “I have travelled around the world and listened to women. And women are tired of waiting for justice. They are demanding action.”

Ms. Bachelet noted that gender inequality continues to exist in many countries and is reflected in their laws. More than 100 countries still impose legal differences between women and men in areas such as a woman’s ability to sign a contract, travel abroad, manage property and interact with public authorities and the private sector.

In particular, she said, women who are poor, or come from racial and ethnic minorities or are displaced tend to be more vulnerable to human rights violations, and highlighted the alarming rates of domestic violence around the world.

“In Australia, Canada, Israel, South Africa and the United States, between 40 to 70 per cent of female murder victims were killed by their intimate partner. In Guatemala, two women are murdered, on average, each day. In India, there were some 8,000 reported cases of dowry deaths per year from 2007 to 2009,” Ms. Bachelet said.

She added, “Women’s access to justice depends on the rule of law and also on women’s economic and political empowerment and participation in decision-making.” 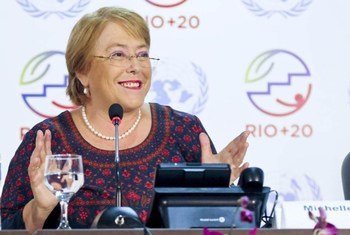 18 June 2012
Importance of women’s role in sustainable development must be reflected in all aspects of Rio+20 outcome document, UN official says.