19 September 2012
Kenyan military troops serving with a UN-backed African Union force in Somalia will endeavour to reduce the potential of civilians being hurt during an ongoing operation, according to the top United Nations humanitarian official for the Horn of Africa country.

“Today, Kenya’s Minister of State for Defence assured me that the Kenya Defence Forces (KDF) would do everything possible to minimize the impact of their ongoing military operation on civilians,” the UN Resident and Humanitarian Coordinator for Somalia, Mark Bowden, said in a news release.

“The Minister also told me that the KDF would help ensure humanitarian access to all people in need,” Mr. Bowden added after his meeting.

The humanitarian official had met earlier Wednesday with Kenya’s Minister of State for Defence, Mohamed Yusuf Haji, and its Chief of Defence Forces, General Julius W. Karangi, to discuss the protection of civilians during ongoing military operations near Somalia’s southern port city of Kismayo.

Despite recent advances in Somalia’s peace and national reconciliation process, after decades of warfare, the African nation is still dealing with the impact of the Al Shabaab militant group, which has been pushed out of capital, Mogadishu, but still controls parts of Somalia, primarily in its south-central regions, including Kismayo.

In addition, UN humanitarian agencies and their partners have been helping Somalis deal with the impact of drought, as well as the after-effects of famine in some areas; while famine was officially declared over earlier this year, many Somalis are still in desperate need.

Along with Somali Government troops, the UN-backed African Union Mission in Somalia (AMISOM) – under which Kenyan military forces in the country now serve – has been engaged in an intense offensive against the Al Shabaab, making inroads in some of the areas surrounding the capital. According to an AMISOM news release issued on Wednesday, troops from its Kenyan contingent have captured a string of towns leading to Kismayo.

Following reports of Al Shabaab militants fleeing the port city, AMISOM has called for calm among Chimayo’s residents, with its Deputy Force Commander stating that the African Union force’s objective is “to liberate the people of Kismayo to enable them to lead their lives in peace, stability and security.”

The Deputy Force Commander also appealed to humanitarian agencies to come to the aid of the people fleeing Al Shabaab-controlled areas, and said that AMISOM troops “stand ready to facilitate any efforts to ease the suffering of the population.”

In his news release, Mr. Bowden noted that while humanitarian actors remain neutral and strictly independent of military and political processes, they rely on all sides to gain access to those in need.

“I welcome Kenya’s assurances and reiterate my call for all parties to the conflict to make every effort to minimize the impact of conflict on civilians and to allow full humanitarian access to all people in need,” the humanitarian official said.

According to the UN Office for the Coordination of Humanitarian Affairs (OCHA), the number of Somalis receiving life-saving aid has more than doubled since July 2011, when famine had been declared, with more than 1.6 million Somalis now receiving food assistance, and 1.7 million people able to access clean water. 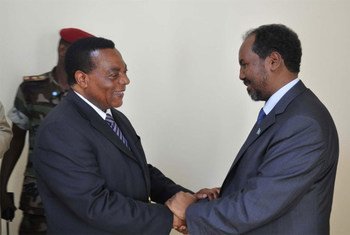 12 September 2012
United Nations Secretary General Ban Ki-moon and his envoy to Somalia strongly condemned today’s attack on a hotel in the capital, Mogadishu, where the country’s new President, Hassan Sheikh Mohamud, was giving a press conference and which resulted in one death and several injuries.