19 September 2012
An independent United Nations human rights expert today condemned the violence that has been taking place in numerous cities across the world in response to an anti-Islamic film, and warned that protest demonstrations and rallies must be peaceful in order to be protected by international human rights law.

“The right of peaceful assembly must not serve as an excuse to commit violence,” the UN Special Rapporteur on the rights to freedom of peaceful assembly and of association, Maina Kiai, said in a news release issued by the Office of the UN High Commissioner for Human Rights (OHCHR).

“Expressing views or discontent is necessary, while safeguarding full respect for the right of peaceful assembly,” he added. “In this context the killing of innocent people and the violent destruction of property are totally unacceptable.”

Various cities across the Middle East have experienced violent protests over the past week in response to a film made in the United States seen as insulting to Islam. The film has drawn widespread condemnation around the world, including from Secretary-General Ban Ki-moon and the UN Human Rights Commissioner, Navi Pillay.

Echoing an earlier statement by Ms. Pillay, Mr. Kiai said it was “deeply shocking that people lost their lives in this violence,” and called on the relevant authorities to bring the perpetrators to justice. He also commended authorities which have already taken steps in this respect while condemning the violence.

“It is the duty of States to distinguish between peaceful and non-peaceful protesters. The latter must be prosecuted and brought before an independent court that guarantees the right to due process,” Mr. Kiai said.

The Special Rapporteur also warned States not to use these isolated incidents to impose blanket restrictions against those seeking to express their opinions in peaceful and non-violent ways.

“Peaceful protests provide a vent to society and also allows governments to understand better the issues their citizens were facing” he said, while also pointing out that unlawful acts of violence sharply contrast with the courage of peaceful protesters who exercise their right of peaceful assembly and who are met, too often, with excessive use of force by law enforcement officials or by those who do not agree with them.

“We must applaud such courage which in many regions of the world has brought about changes in States and societies based on human rights,” Mr. Kiai said. “Violence only triggers further violence – dialogue must prevail at all times to ensure the realization of the right to freedom of peaceful assembly for all.”

Independent experts, or special rapporteurs like Mr. Kiai, are appointed by the Geneva-based Human Rights Council to examine and report back, in an unpaid capacity, on specific human rights themes. 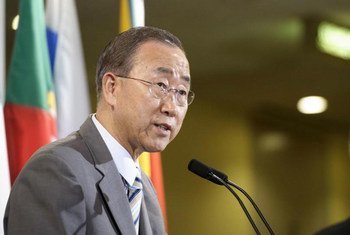 14 September 2012
United Nations Secretary-General Ban Ki-moon is “deeply disturbed” by the recent violence in Libya and elsewhere in the Middle East and has called for calm and restraint to end hostilities, according to his spokesperson.